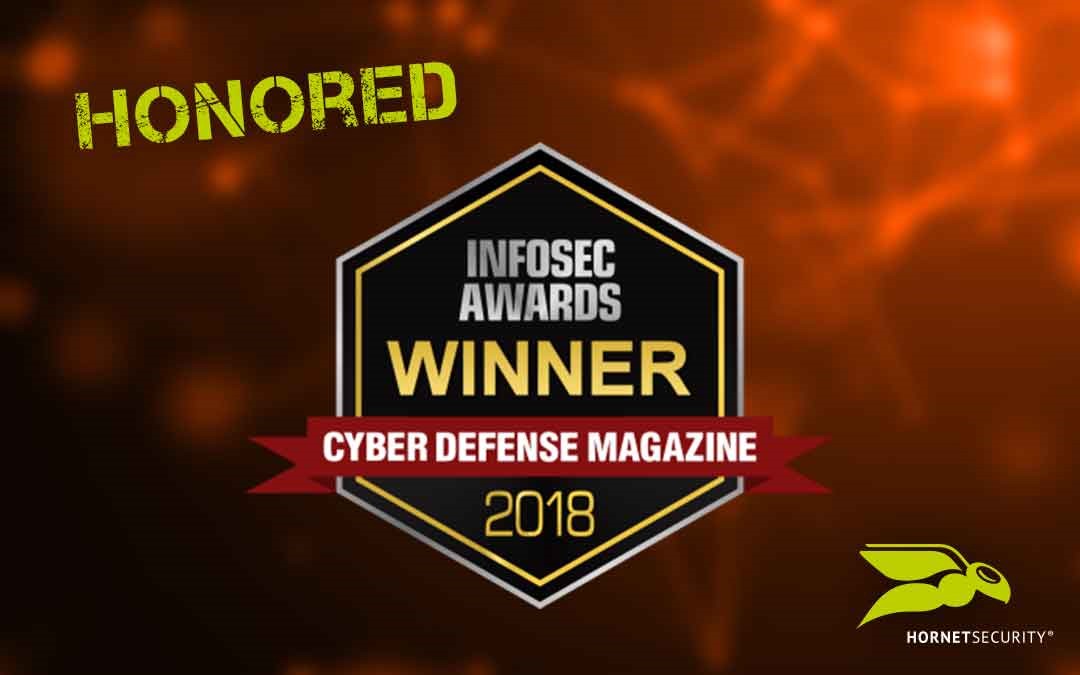 San Francisco, April 16, 2018 – Cyber Defense Magazine has awarded Hornetsecurity with a 2018 InfoSec “Cutting Edge” award in the category of Advanced Persistent Threat. The award will be accepted by CEOs Oliver Dehning, Daniel Hofmann and Daniel Blank at the annual RSA Conference tonight in San Francisco. “We’re honored and humbled to receive this recognition for the first time.” Dehning said. “With the constant and evolving cybersecurity threats to companies around the world, finding ‘cutting edge’ solutions is no longer a luxury. It’s a requirement for any company that aims to provide true value for its clients.” The InfoSec Awards are the culmination of Cyber Defense Magazine’s annual review of the hottest, most innovative, best, market leading, next-generation and cutting-edge InfoSec (information security) companies. The winners were evaluated from nearly 3,000 companies worldwide. “With Cybercrime continuing to gain momentum, surpassing global drug crimes last year and totaling more than $600 billion in theft and damages, we are proud to honor Hornetsecurity as an award-winning innovator offering a new approach to defeat these criminals,” said Pierlugi Paganini, Editor-in-Chief, Cyber Defense Magazine. Hornetsecurity’s award coincides with a move into the United States, where it recently opened a base of operations in the rapidly growing tech community of Pittsburgh. Revenue has skyrocketed since the introduction of the company’s Advanced Threat Protection software in 2016. The expansion also aligns with the company’s continued focus on innovative solutions that are defined as much by customer service as they are by the software itself.
“At Hornetsecurity, we believe a paradigm shift is necessary in the IT community.” Dehning said. “We need more encryption instead of open data, we must assume overall responsibility for the security of the systems and solutions we offer and we must fight the imbalance between attackers and defenders by using more cloud-based security solutions.”

Hornetsecurity has been focused on cloud computing since 2007, when the company was founded by Oliver Dehning and Daniel Hofmann in Hannover, Germany, where it maintains its global headquarters. Today, Hornetsecurity has grown to more than 70 employees, offering comprehensive security solutions in the fields of email security, web security and data storage to more than 30,000 business customers around the world. In 2017, Hornetsecurity opened a United States base of operations in Pittsburgh.

With more than 1.2 million annual readers and growing, Cyber Defense Magazine is the premier source of IT Security information. We are managed and published by and for ethical, honest, passionate information security professionals. Our mission is to share cutting-edge knowledge, real-world stories and awards on the best ideas, products and services in the information technology industry. We deliver electronic magazines every month online for free, and limited print editions exclusively for the RSA conferences and our paid subscribers. Learn more about us at http://www.cyberdefensemagazine.com. CDM is a proud member of the Cyber Defense Media Group.