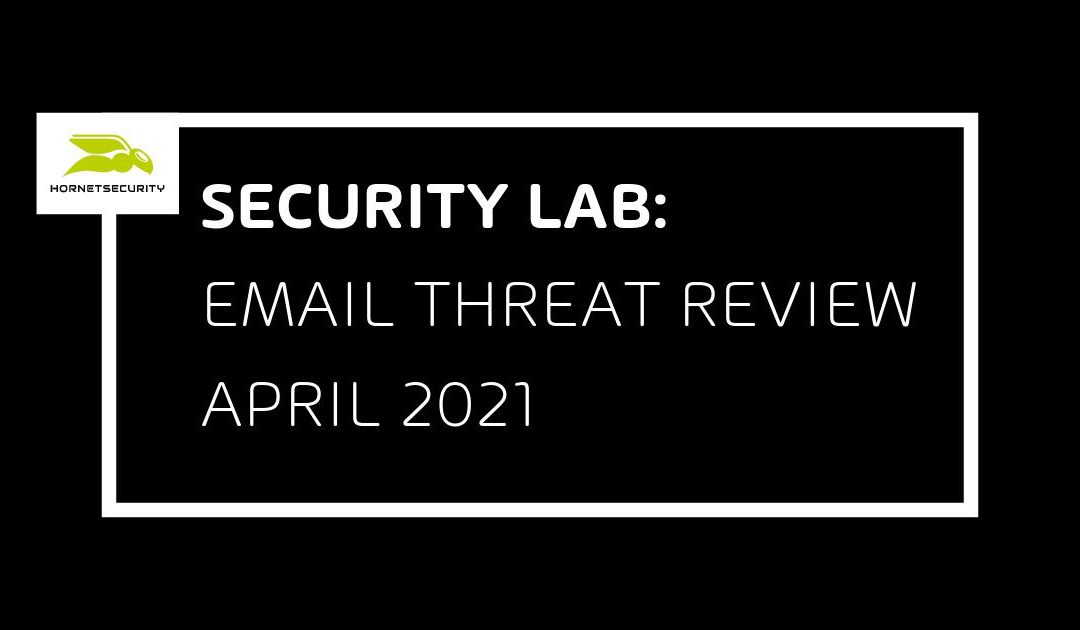 In this second installment of our monthly email threat review, we present an overview of the email-based threats observed in April 2021 and compare the it with March 2021.

The following table shows the distribution of unwanted emails by categories.

The following time histogram shows the email volume per category per hour. 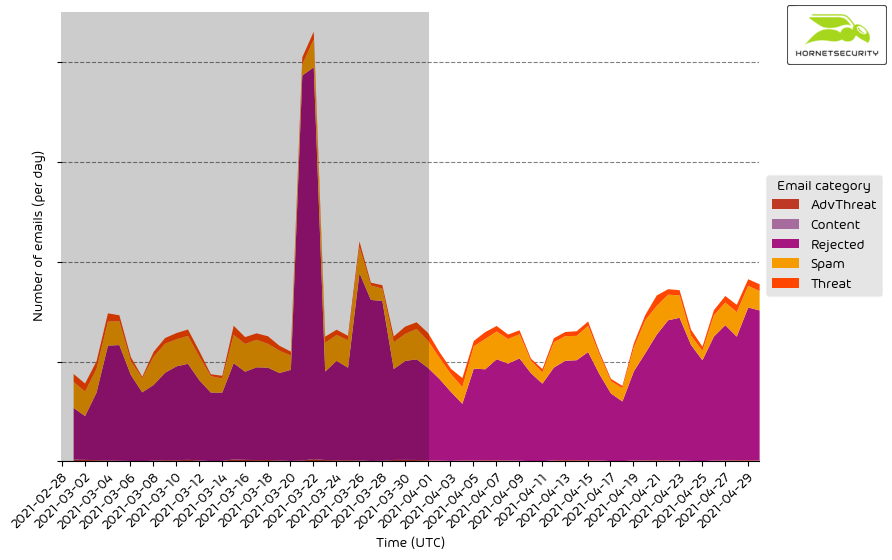 Unlike in March, there were no obvious anomalous spikes in the unwanted email volumes in April. 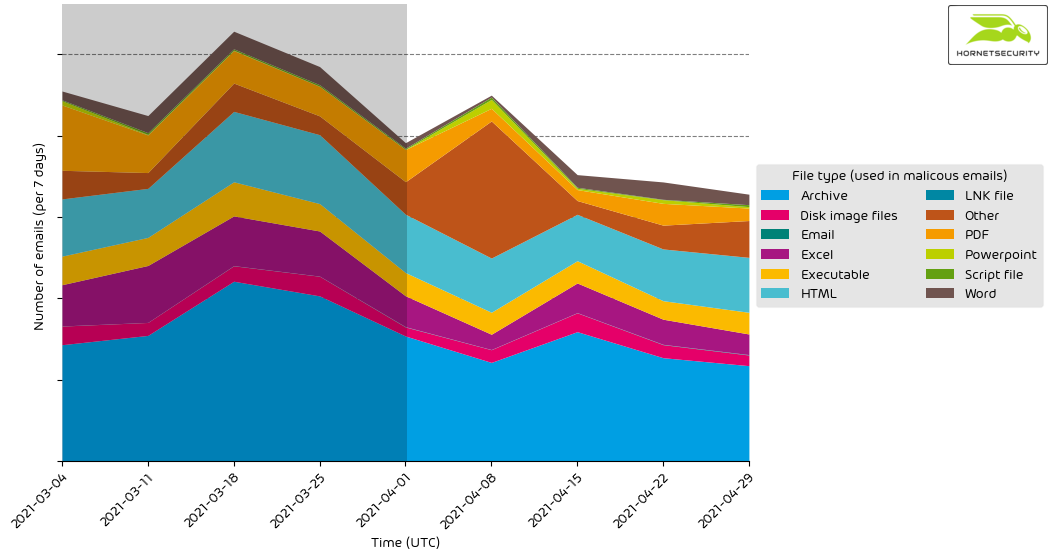 Archives (.zip, .rar, .gzip, .ace, .tar.gz, etc.) are more popular. The most prevalent use for archives in attacks is compressing the malware executable and attaching it directly to the attack email. This is done in hopes that the targeted email system is not able to scan compressed attachments. Low-quality criminal threat actors often use this technique as it does not require any technical expertise. Another use for archives is to compress malicious documents. This is also done to reduce detection.

HTML files (.htm, .html, etc.) are used either for phishing, having the phishing website attached directly to the email1 (thus circumventing URL filters), redirecting victims to websites for malware downloads2 (again to not directly include a clickable URL in the email), or social engineering.

PDFs (.pdf) use embedded links or other social engineering lures.4

Attaching executables (.exe) directly to emails is the laziest approach. It is used mainly by low-quality criminal threat actors.

The following table shows the Top 10 of our Industry Email Threat Index calculated based on the number of threat emails compared to clean emails received (in median) by each industry. 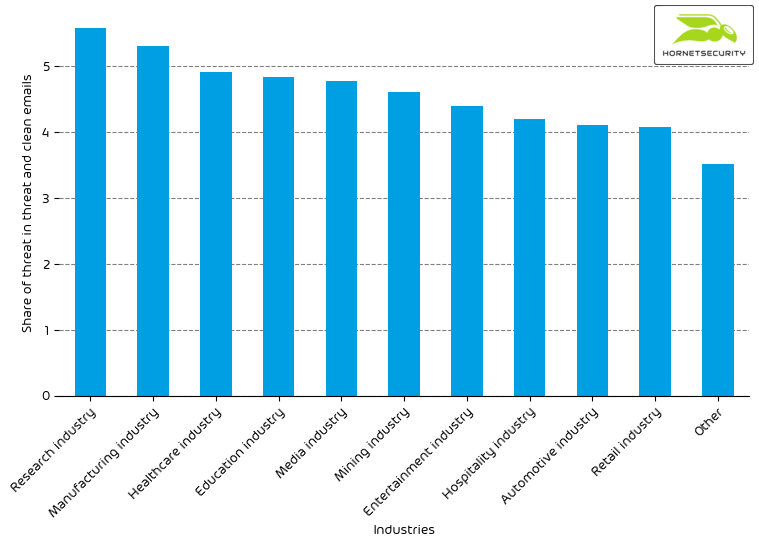 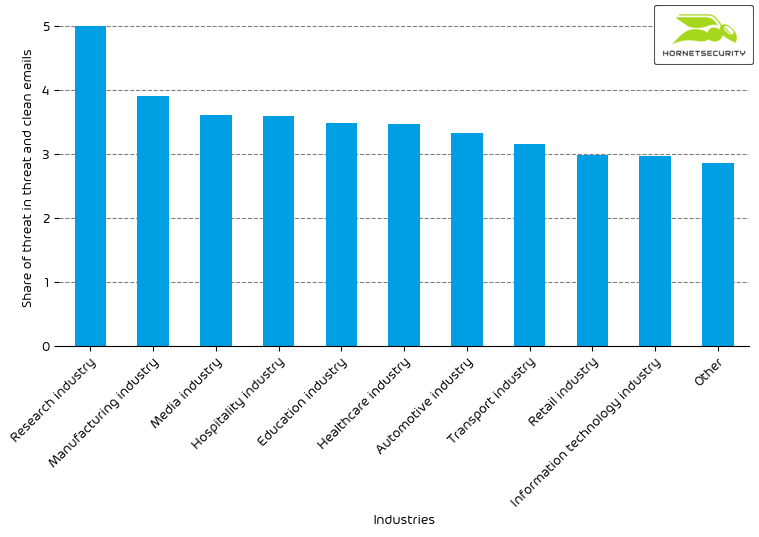 The global median of threat emails in threat and clean emails for organizations fell from 3.7% in March to 3.0% in April. This decrease can be seen for all industries. However, while the manufacturing industry dropped from 5.3% to 3.9% and the other industries similarity the research industry remains at 5% ratio of threat emails in their received threat and clean emails.

Different (sized) organizations receive a different absolute number of emails. Thus, to compare organizations, we calculated the percent share of threat emails from each organization’s threat and clean emails. We then calculate the median of these percent values over all organizations within the same industry to form the industry’s final threat score. 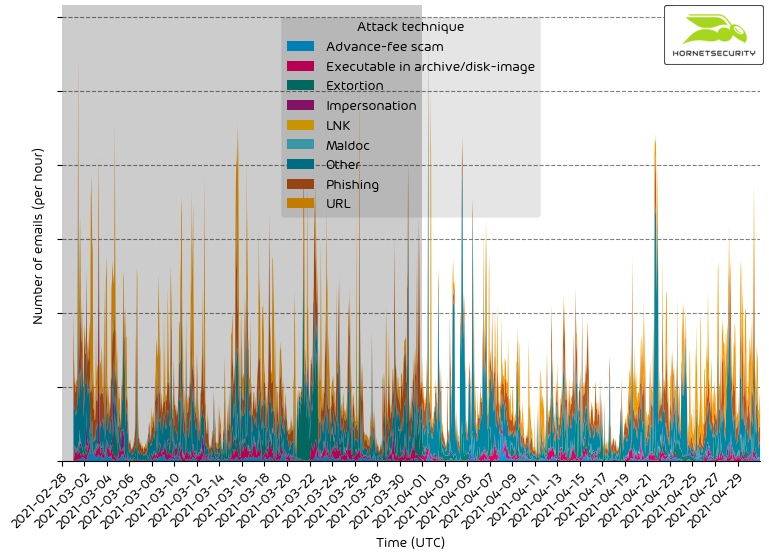 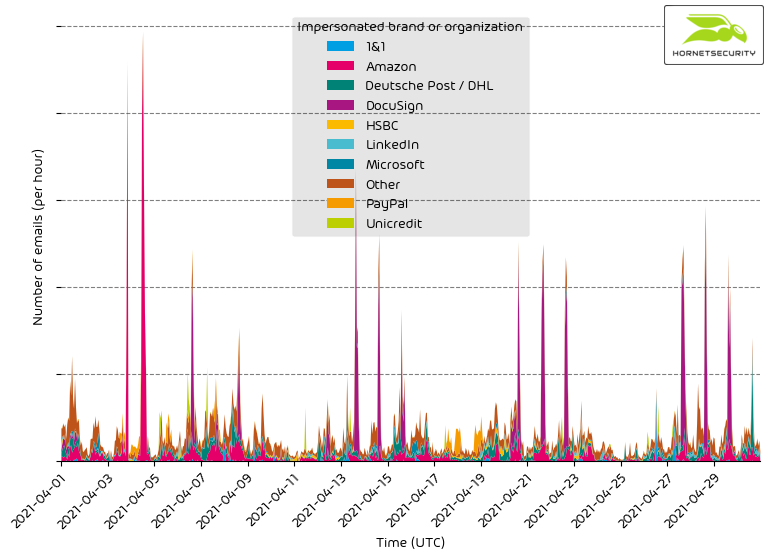 A reoccurring Hancitor malspam campaign dominates the impersonation of the DocuSign brand.

The following time histogram shows the email volume per hour for a list of highlighted threat email campaigns. 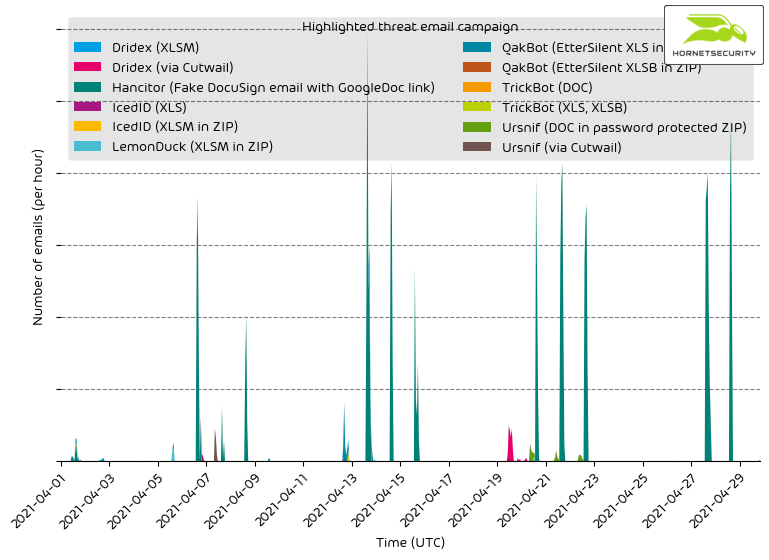 We can see that the malspam waves of the selected campaigns have well-defined start and endpoints, unlike less sophisticated mass-spam email campaigns, which will send email in a constant stream.

As outlined earlier in the section on impersonated company brands or organizations the reoccurring Hancitor malspam campaign pretends to be documents send via DocuSign. The campaign spikes correspond to the previously spikes in DocuSign impersonation detections.

One shown campaign stands out not because of its volume but for its low detection rate by other security solutions. The Cutwail-A botnet updated their XLSM maldocs. This time it was distributing Ursnif. 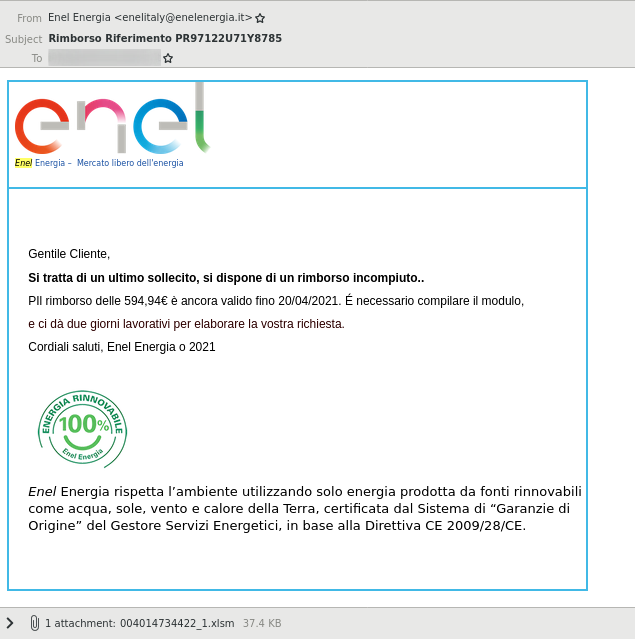 At the time of delivery, the maldocs of the campaign were detected by only 3 of 62 detections on VirusTotal.

We are aware that VirusTotal detection does not represent the real dynamic detection of the listed security products. However, because the campaign was already caught by Hornetsecurity’s Spam and Malware filter using static detection signatures, it is an apples-to-apples comparison and outlines Hornetsecurity’s detection capabilities when it comes to threat email detection.

Threat actors continue to leak data stolen from ransomware victims to pressure them into paying not only for decrypting the files encrypted by the ransomware but also for not making the data stolen before encryption public. We observed the following number of leaks on ransomware leaksites:

The following bar chart visualizes the number of victim data leaks per leaksite. 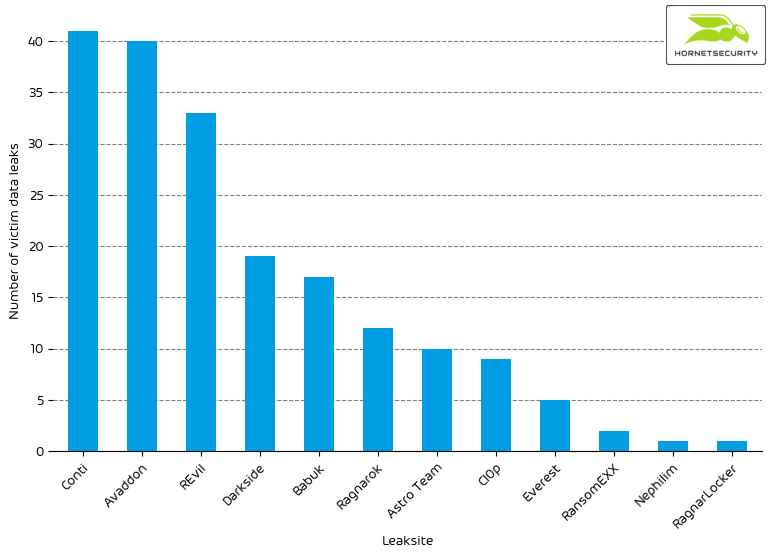 After the announcement, Darkside started tagging their posted victims with their respective stock tickers.

Also, this month the Babuk ransomware announced the closing of their ransomware operation. 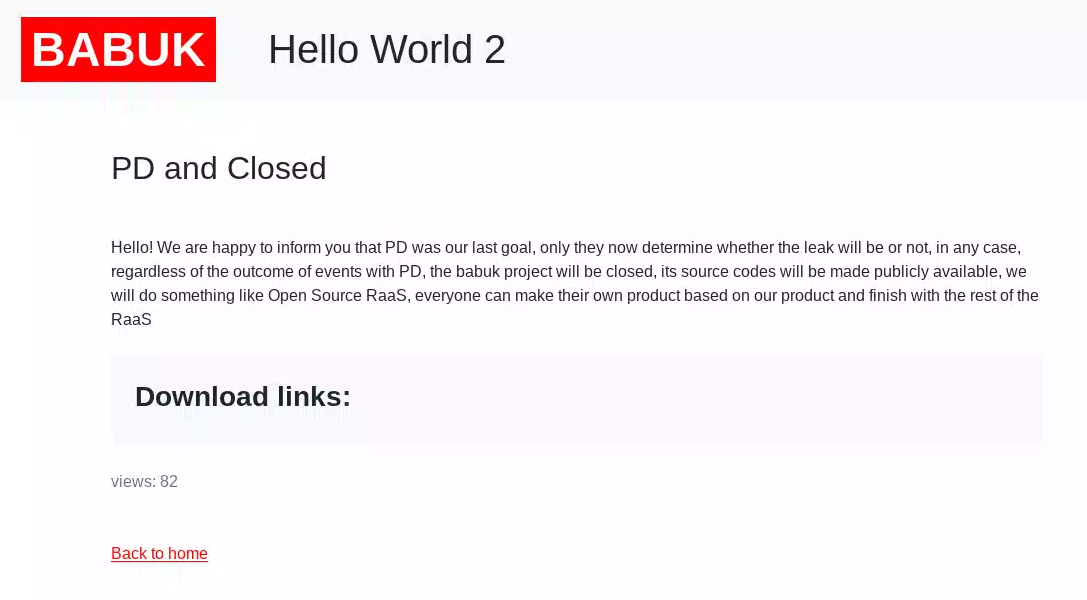 However, only a few days later, they clarified that they would only close the ransomware part of their operation. They will continue stealing data from victims and extorting them with the publication of the stolen data.

We hope you found the second installment of our monthly email threat review informative. Get back next month for more and updated email threat landscape insights.