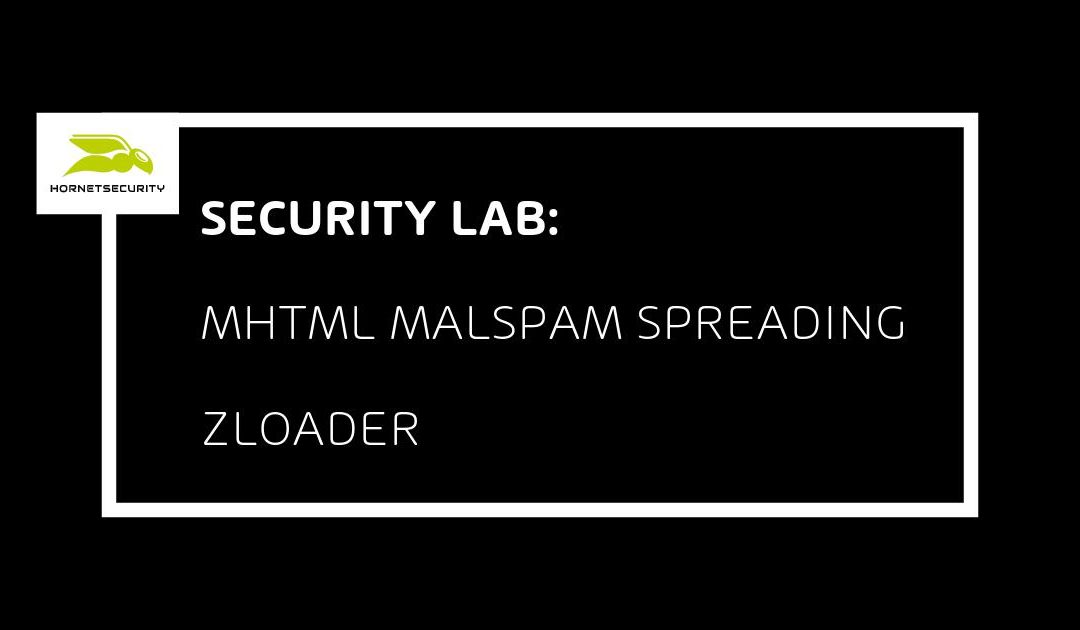 Zloader1 malware (associated with the kev configuration tag) is spreading via malspam using MIME encapsulation of aggregate HTML documents (MHTML)5 attachments. These MHTML files contain a Word document with VBA macros. The VBA macro code downloads and decrypts a password-protected XLS file, and after that, the XLS file decodes and executes the Zloader malware embedded within it.

In February 2020, campaigns distributing Zloader ramped up usage of XLM (also known as Excel 4.0) macros. Detection of this old spreadsheet-based by design self-modifiable macro code format by anti-virus software is far lower than detection of regular sequential not by design self-modifiable plain-text VBA macro source code. We already highlighted the abuse of XLM macros in previous reports, e.g., XLM macros used to spread QakBot2 or BazarLoader3. However, as detection for XLM macro code has picked up with even Microsoft adding XLM macro support to AMSI4, threat actors continue to evolve.

The chain of infection of the Zloader MHTML campaign is as follows: 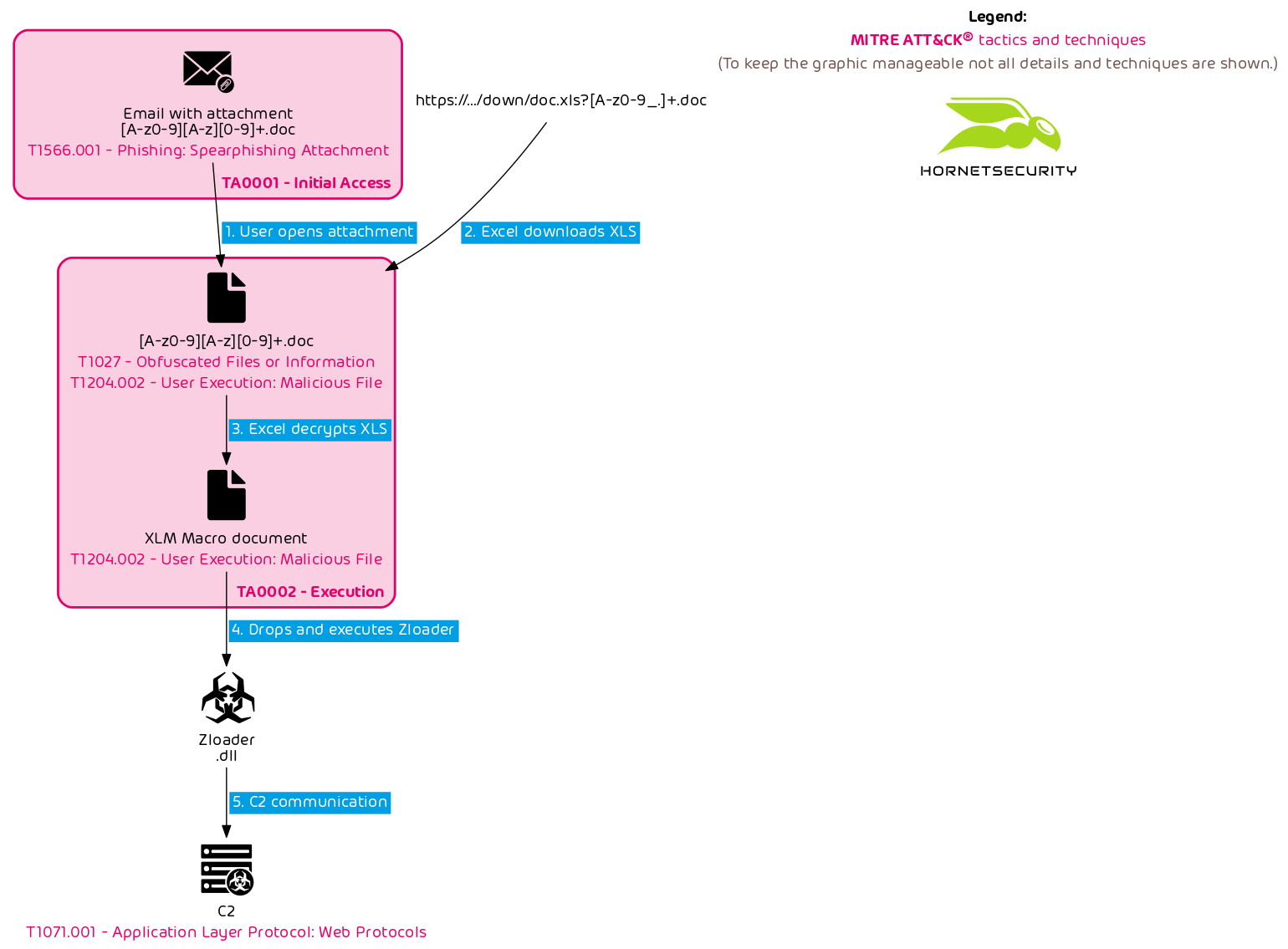 We will now outline each step of the attack chain.

The attack starts with emails.

The first emails were designed and built like purchase invoices.

The wording and pretext changed between emails of this campaign. However, the general “invoicing” theme remained constant.

Initial email attacks were of low volume, the emails templates above have not been used much.

In February, contract pretexts were added to the mix of invoice pretexts.

After that, with recent changes to the email template, the campaign’s volume started to increase sharply. 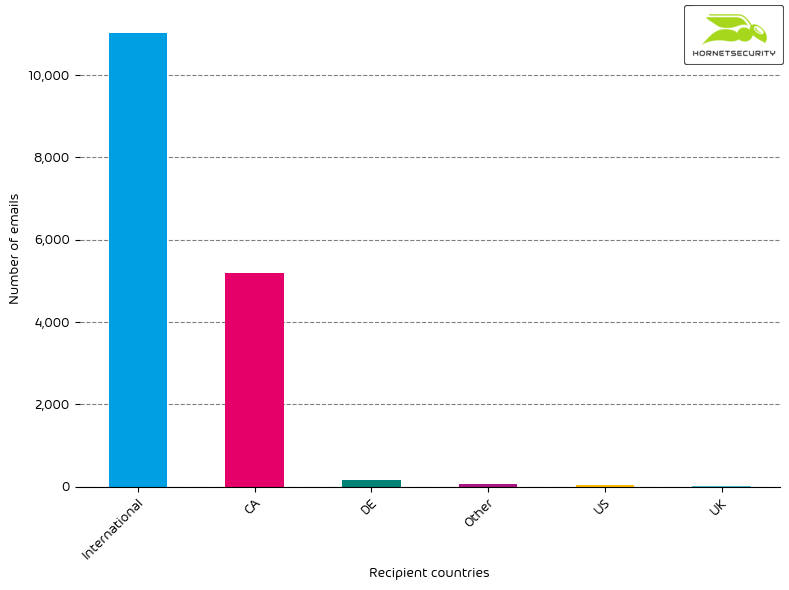 However, the time histogram shows that on 2021-02-15, the majority of Zloader MHTML emails were destined for Canadian recipients. 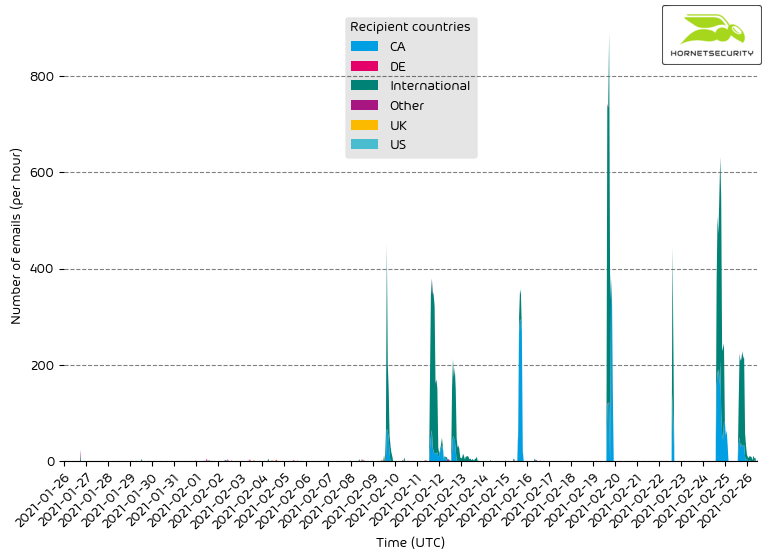 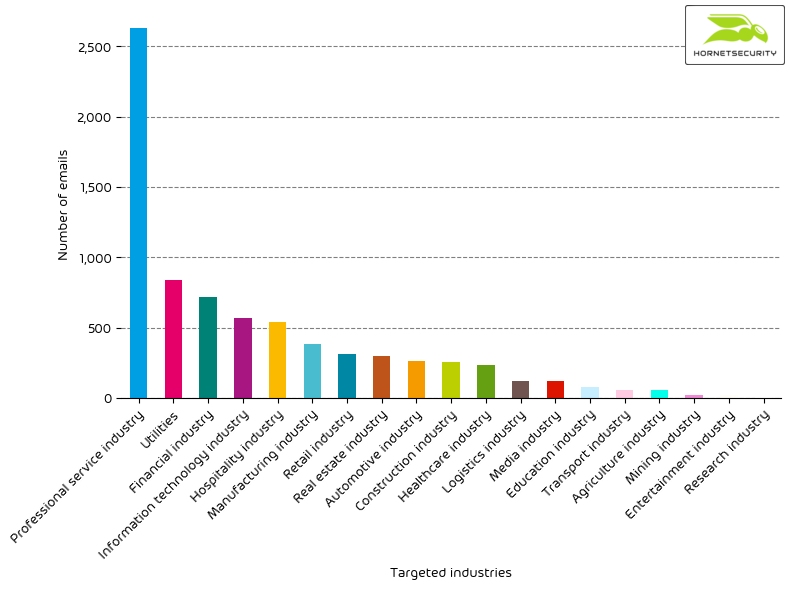 The MHTML document’s extension was set to .doc, so Microsoft Word will open the documents directly. 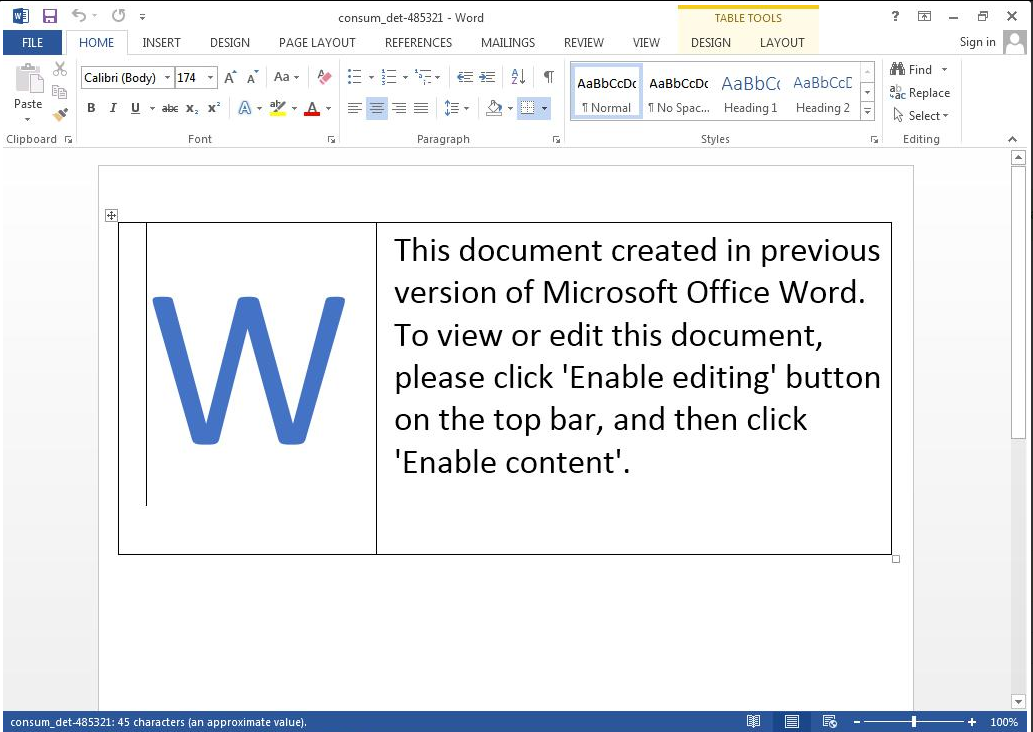 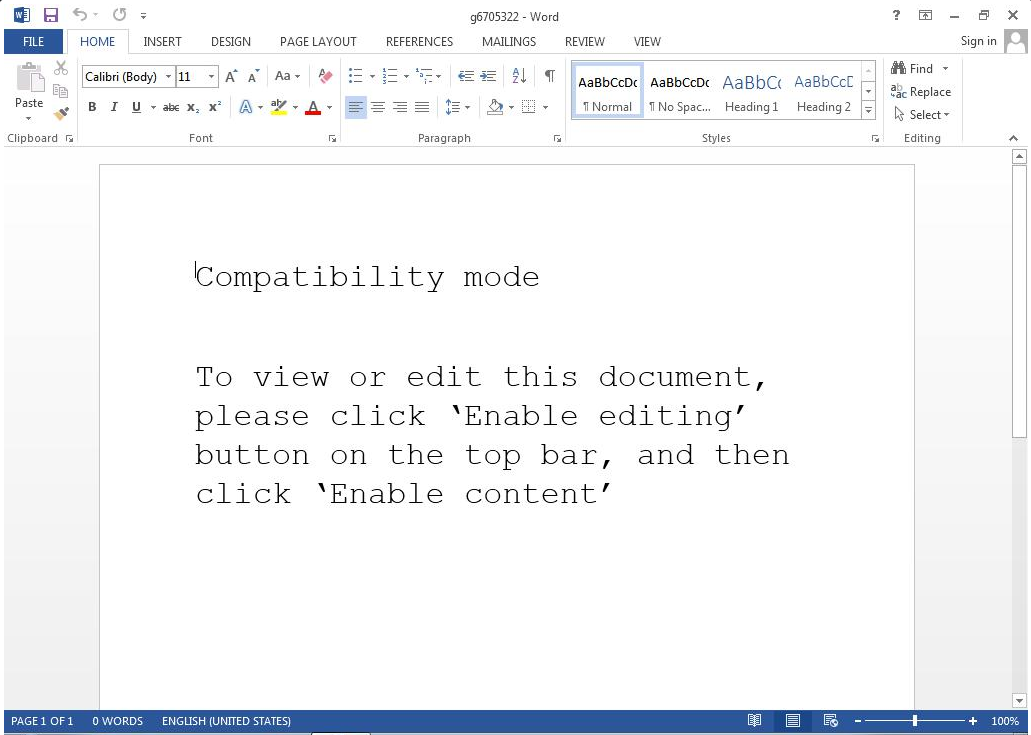 The MHTML document is an ASCII document featuring multiple MIME-parts.

One MIME-part contains the lure image.

The other parts contain an application/vnd.ms-officetheme and an application/x-mso file. Which (in addition to the text/xml files) are used by Microsoft Word to load the embedded Word document.

The document will automatically execute the macro code on closing the document: 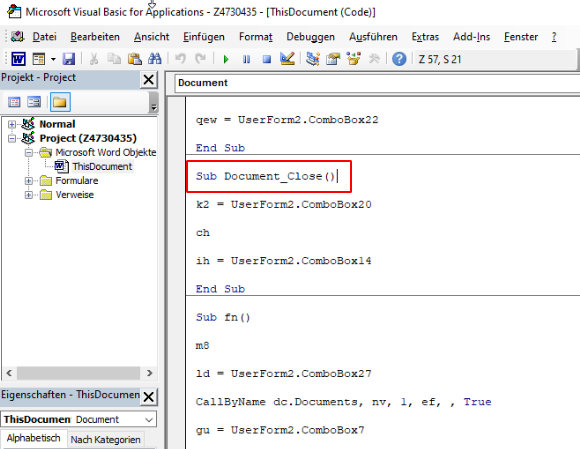 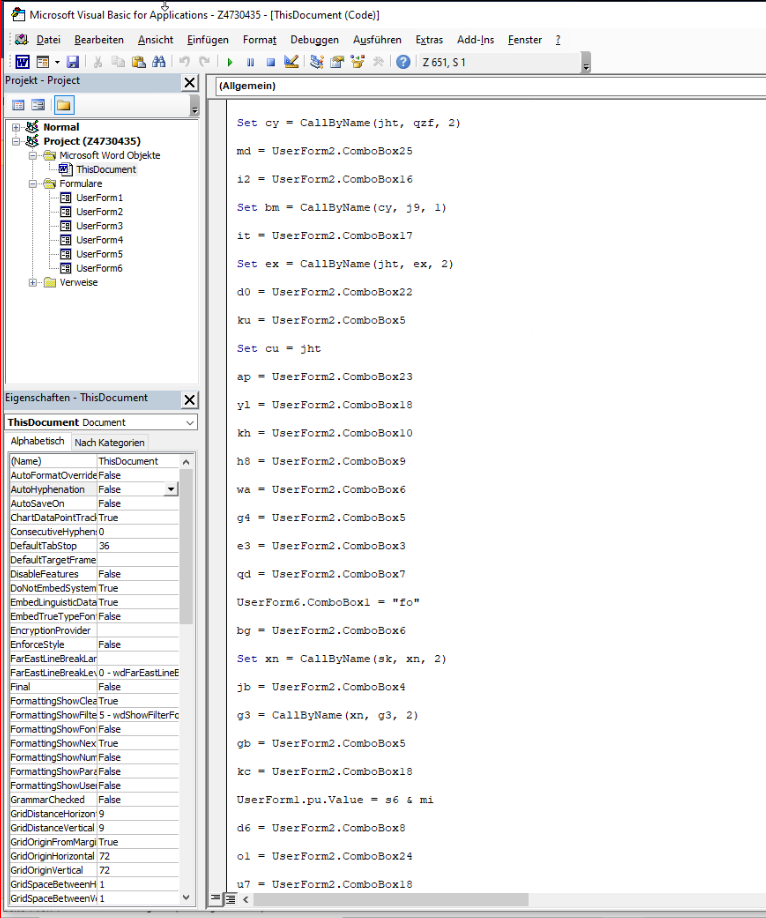 Within the ComboBox objects’ initialization code in the UserForm objects and various other mechanisms, a download URL and a password are assembled and used within a call to the VBA function CallByName. This calls the Workbook object’s open function with the fileName parameter set to the download URL, the Password parameter set to the assembled password, and the other optional parameters left empty.

The call will cause Word to open Excel and download the encrypted XLS file from the URL https://findinglala[.]com/down/doc.xls?ekyh_vD91041.z4730435.doc. Excel will use the provided password to decrypt the document.

The XLS document will use XLM macros to decode and use rundll32.exe to execute an embedded Zloader payload.

Zloader is a fork of the famous Zeus banking Trojan. It is a loader that allows its operator to load additional malware onto infected devices.

The via rundll32.exe started Zloader process from the XLS document will spawn a suspended msiexec.exe process and inject code into it.

Then, WriteProcessMemory is used to write code into it. 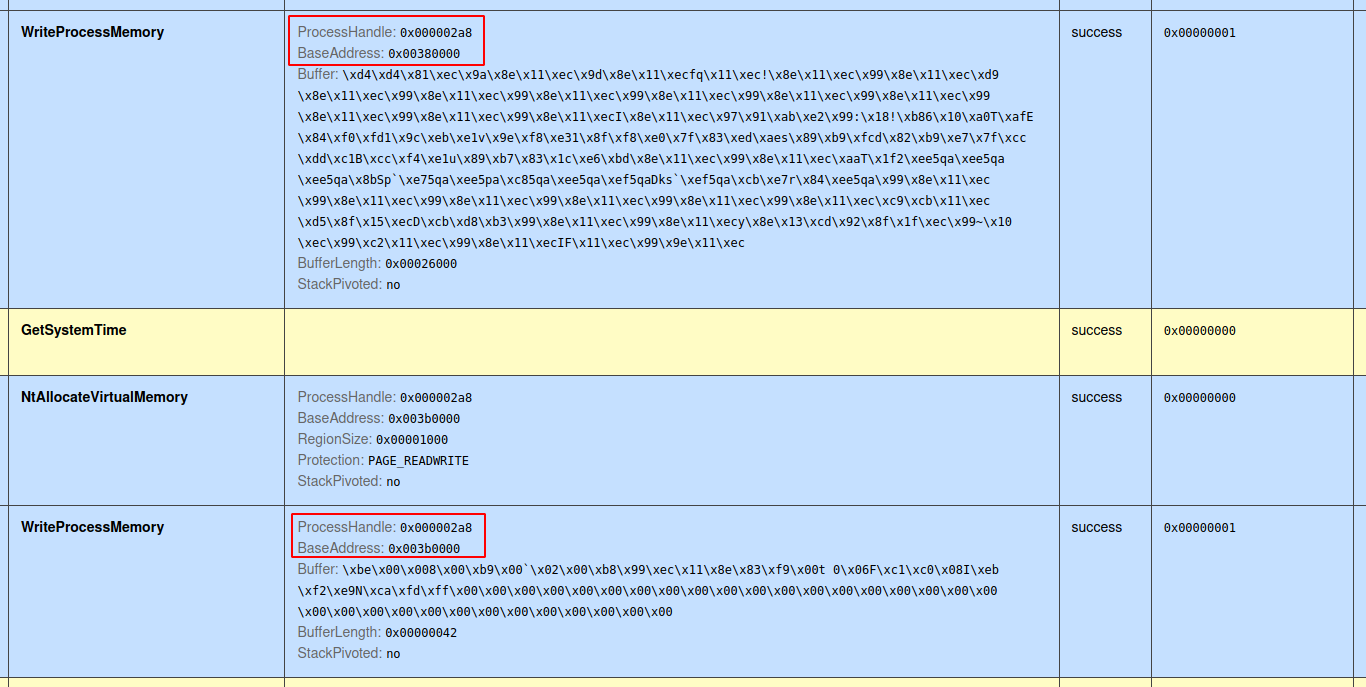 Eventually, the Zloader code running in rundll32.exe resumes the thread in the msiexec.exe process via NtResumeThread and the injected code starts running. 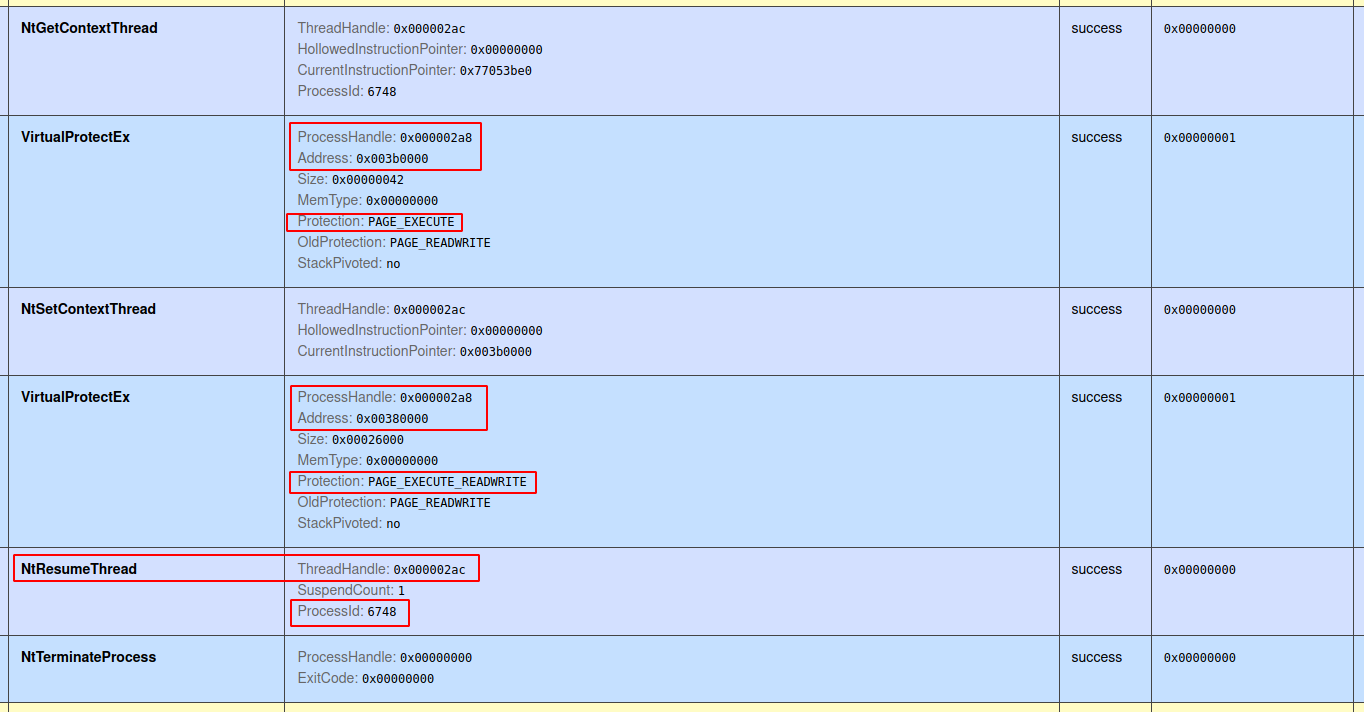 Zloader will then generate a lot of random directories in %APPDATA%\Roaming. 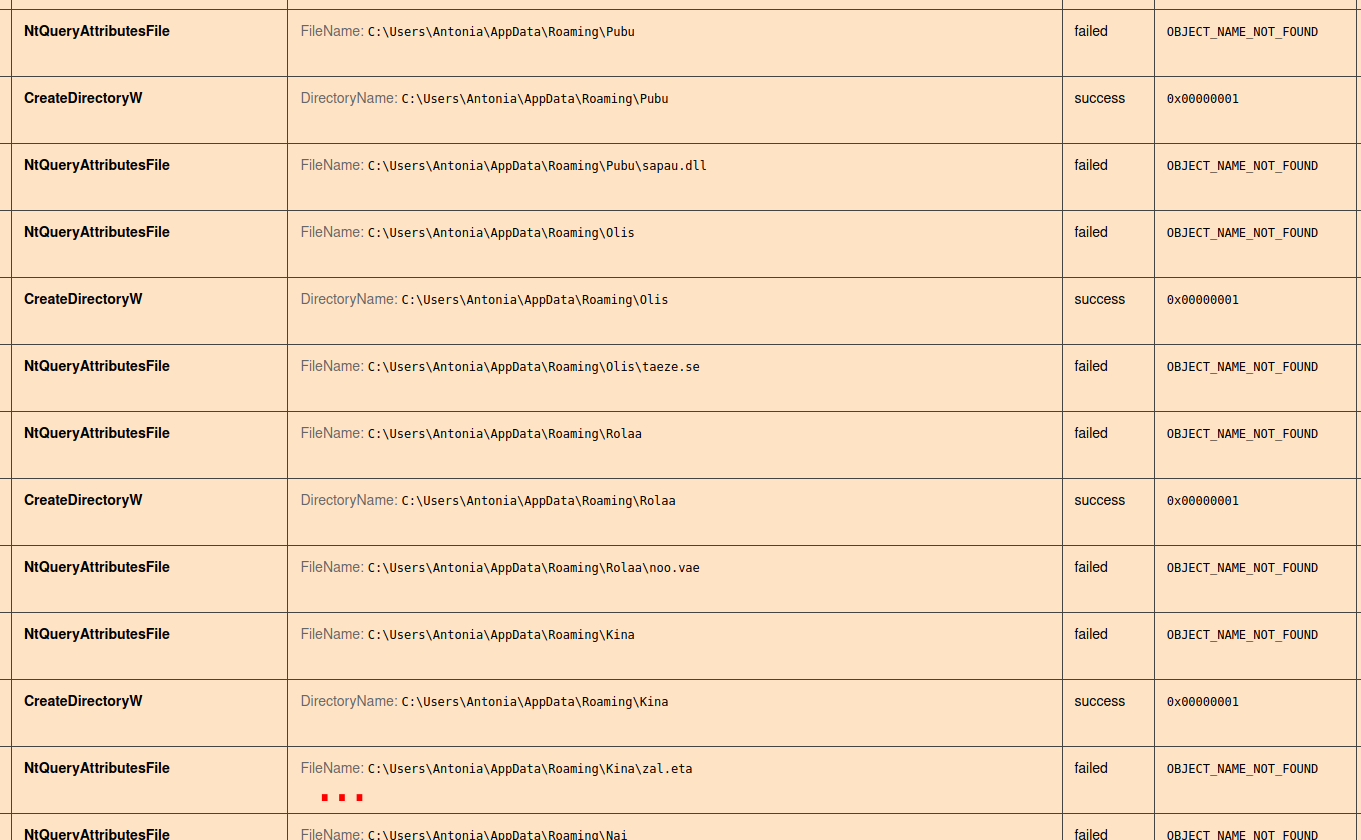 In the next step, data from the DLL is being written back into a new file.

The other folders remain empty but can be used at later points in time to hold additional data. 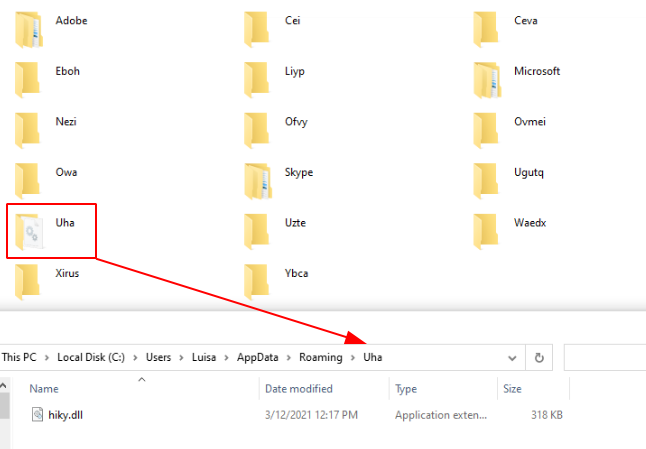 The original DLL is deleted.

The Zloader DLL injected into msiexec.exe can be extracted either automatically via the open-source CAPE sandbox, manually dumped by breaking on NtResumeThread in the original rundll32.exe process, then dumping the msiexec.exe process, or semi-automatically by using a tool such as hollows_hunter5 (or PE-Sieve). 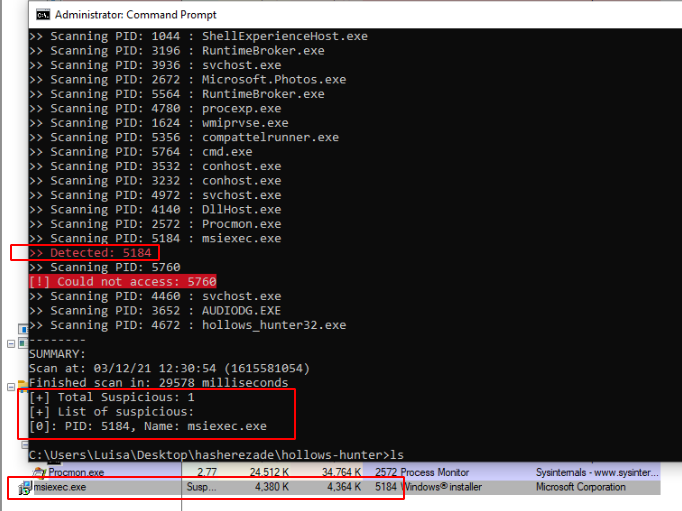 The following analysis was performed on a Zloader DLL dumped from the msiexec.exe process.

The Zloader malware is obfuscated. It makes extensive use of junk code, i.e., adding program instructions that do not contribute to the program logic with the sole purpose of complicating analysis. Further, it often calls complicated functions to perform trivial calculations, making the code appear very complex. For example, the following is a function that performs the binary AND operation on two parameters. The code is littered with such junk code. 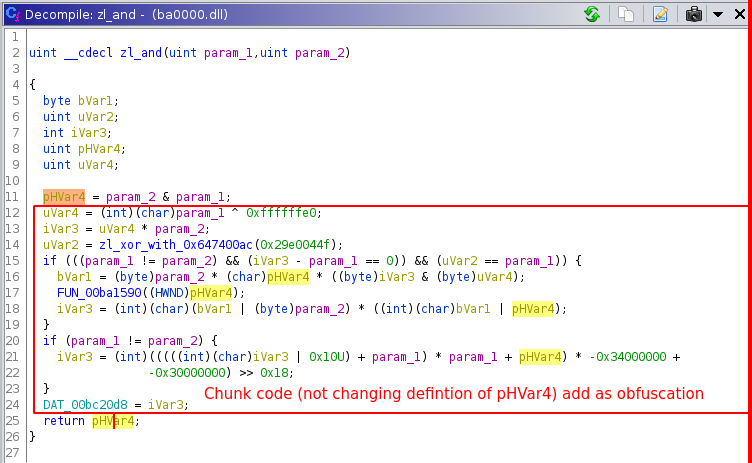 Functions are dynamically resolved at runtime via a hash lookup. Instead of calling a function directly, a proxy function returning a pointer to the desired function is called. The following example shows the function with which Zloader deletes its original file. The function we named zl_get_func received two parameters, the first is a library ID (0 is ntdll) and the second is a hash of the function name that should be called. 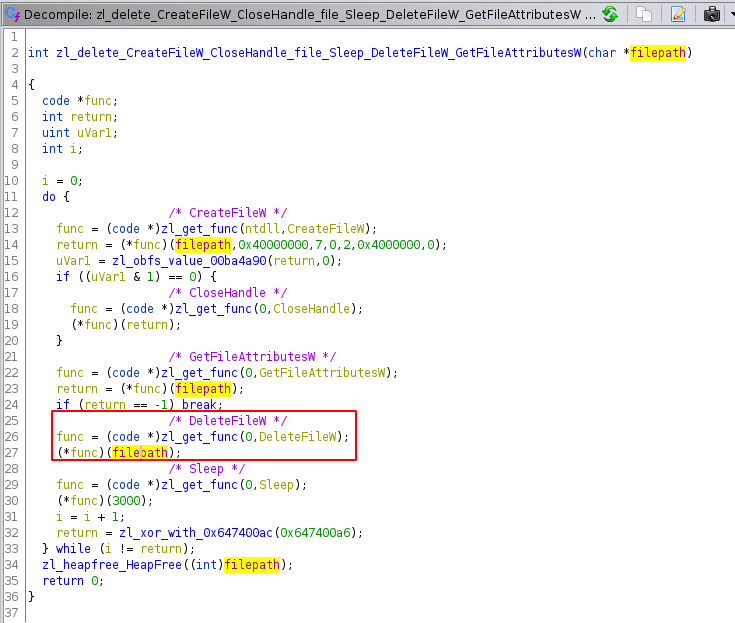 This is standard practice in modern malware, so no suspicious imports are present in the binary. It also makes a static analysis more complicated. 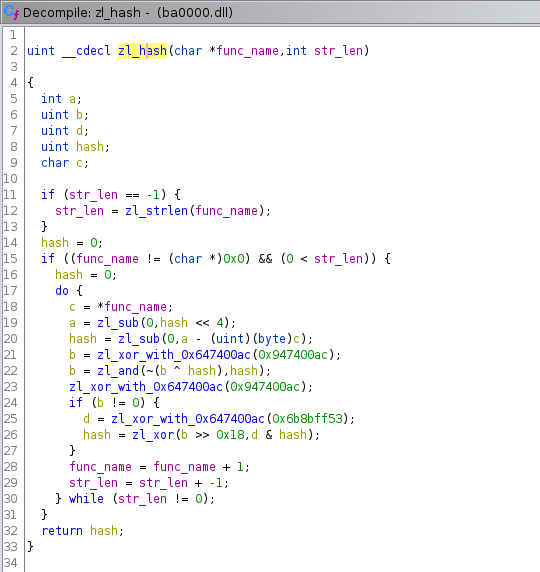 However, it can be reimplemented in Python as follows.

With this function calls can be de-obfuscated.

Strings are XOR encoded with a static repeating ASCII keystream.

The Zloader configuration is RC4 encrypted with a key using only ASCII as keyspace. 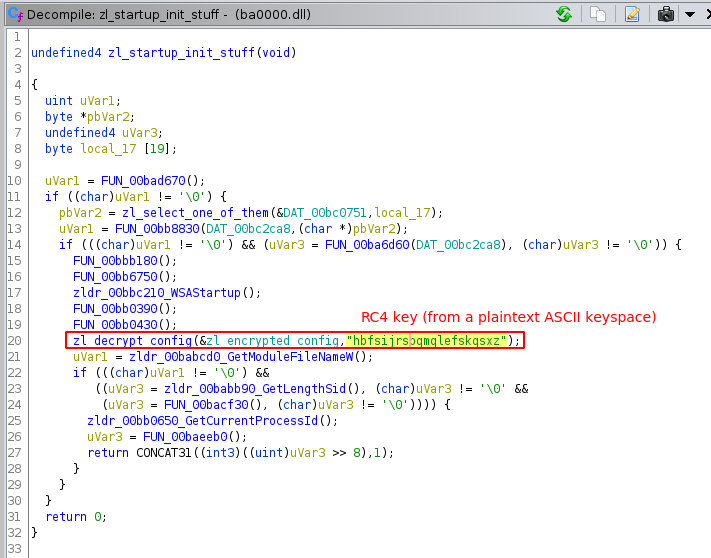 The data at the location we labeled zl_encrypted_config can be decoded with the ASCII string handed as the second parameter to the function we named zl_decrypt_config. Consequently, the configuration of the Zloader sample will be revealed.

The configuration contains a botnet name the particular sample is associated with, a campaign ID (presumably for the threat actors to keep track of infections per campaign), an RC4 key (used to encrypt and decrypt updated configuration stored in the registry) and last but not least a list of command and control URLs the malware should connect to for commands and updates.

The configurations of downloaded pieces of Zloader malware associates them with the kev botnet. The kev ID has been publicly observed since December 2020.

Zloader has been identified as an access vector for Ryuk and Egregor ransomware deployments. Whether the installments associated with the kev configuration tag are part of this or a different ransomware operation is currently unknown. However, by the direction the current threat landscape is moving, it is highly likely the malware is also used to deploy ransomware.

Spreading the attack into multiple encoded stages (document in HMTL; payload URL in UserForms; download of password-protected XLS; decoding of Zloader payload from decrypted XLS) shows that much effort was put into evading detection. Even after the campaign ran for several weeks, the initial MHTML documents still only got 7 out of 61 detections when first scanned on VirusTotal.

The unusual MHTML encoding of the initial Word document can pose problems for security software unfamiliar with this format. Its initial layer must be parsed differently from OLE/CDF/OpenXML-based Office documents and being ASCII plain-text may completely bypass some detections. For network-based protection software, it is impossible to investigate the intermediary downloaded XLS document with the Zloader payload – because it is encrypted. Another struggle is the low level of maliciousness of the initial Word document. While downloads from documents should always be deemed at least suspicious, in this case, only another Excel document was download. Some business workflows may require Word documents to download resources from web. Consequently, the observed behaviour may fly under the radar. Hence, spreading the malicious components (download; dropper; Zloader malware) over multiple stages can bypass detection for some security solutions.

The following DC3-MWCP configuration parser is an update to CAPE’s Zloader parser and can be used as a drop in replacement (additionally we opened a pull request with the upstream project):

The following regular expressions describe the attachment names used in the campaigns: