“For your safety” – Beware of fake ING-DiBa emails 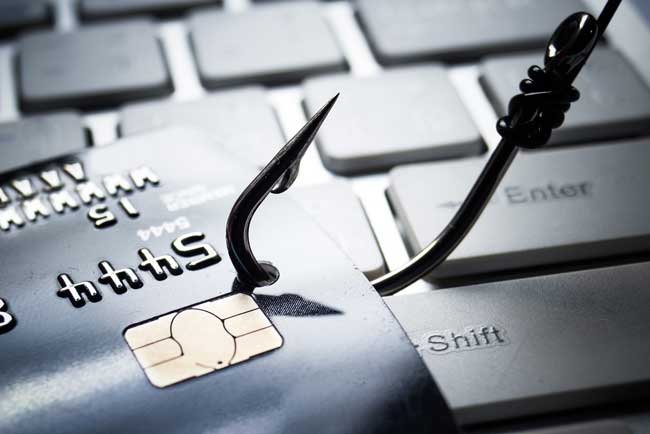 Cybercriminals are currently trying to obtain sensitive data from ING-DiBa customers with dubious fake emails. The fake email claims that a problem has occurred during a routine security check of the online banking system. It advises that customers should immediately log on to an external website to avoid troubles with their bank.

However, in reality, this is a phishing attack that tries to collect personal information. In the following blog article, you will learn in detail how to protect yourself from fake emails or phishing attacks.

The fake email from our example 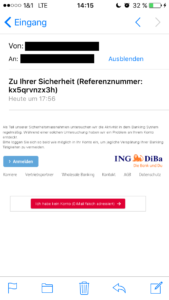 The adjacent picture shows the detailed structure of the fake email – allegedly sent by ING-DiBa – in an iPhone mailbox. In fact, the email is part of a mass phishing attack and the message was sent fraudulently to a variety of email recipients.

For example, the subject line states “For Your Safety (Reference Number: xyz)”, and the presumable arbitrary order of the combination was set to “kx5qrvnzx3h” in this case. Before we blackened the personal information for reasons of data protection, we noticed that both the recipient’s address and the sender’s address had the same information. This was already a first indication of a fake email.

This scam is not uncommon amongst perpetrators when it comes to gathering information about their randomly selected victims via phishing. Those affected are especially inclined to follow the attached link if the phishing or fake email is opened on a mobile device, as it is in this case. This is particularly true if they are actual customers of the bank mentioned in the email.

In everyday life, too, recipients of phishing emails are also quick to follow the link when receiving such an email. The attacker offers the targeted person appropriate options in case a recipient does not have an account with ING-DiBa. In our example, the recipient has the opportunity to follow a flashy red button and allegedly communicate that he is not a customer of ING-DiBa. The destination of the link, however, is a phishing website, which is intended to tap user data in a big way from the mostly unsuspecting victims. The fake security notification of ING-DiBa is not an isolated case.

With the following tips, you will be able to detect phishing or fake emails to protect yourself from being affected by such attacks.

Feature No. 1: The salutation

It is striking that either a standard phrase is used to address the target person, or the salutation is completely missing. Very rarely recipients of phishing emails are addressed with their whole name. This is due to the fact that fake emails are not isolated cases, but often automated emails which are sent out millions of times. Individual addresses are rather the exception. In our example there was no address at all.

Once the victim has entered his details into the according form fields and pressed the confirmation button, the cybercriminal is in possession of the login details. Now he can make orders in online shops under false names or get access to sensitive account or company data. The phishing attack has been successful.

A phishing mail is contextually designed to hide the true intentions towards the recipient at least until he first clicks on one of the attached links. These following baits are very popular with cyber crooks: This shows that cybercriminals are very creative when it comes to fooling their victims.

Feature No. 3: The call to action

Once the attacker has created and sent out his fake email, he urges the recipient to act. In this specific case, the targeted person is initially led to an external page by clicking on a link. This page usually resembles closely the login area of a bank, an online retailer or any other company that offers certain Internet services.

Feature No. 4: The time shortage

An effective means often used by attackers is the limitation of time. This is an attempt to put the victim under stress and distract it. In our example, this is stated as follows: “Please log into your account as soon as possible to avoid any delay in your banking activities.” Fear-spreading phrases in the subject line, such as “Your account has been suspended” or “An amount has been debited from your account” are also quite popular and common. These sentences cause some recipients to panic, so they follow the attached link without much thought.

Feature No. 5: Questionable buttons and links

In order to successfully carry out the process of phishing, a related link in text or button form is part of the standard repertoire of any phishing or fake email. This is also the case in our example. Therefore, when it comes to questionable security queries that have a link, we recommend that you do not access these links from your email program. Instead, you should always directly log in to your user accounts via a browser or via the official website of the provider. This applies to online services of any kind.

Feature No. 6: This is how reputable companies and institutes work

As far as the detection of phishing emails or fake emails is concerned, it should always be remembered that reputable companies or institutes would never ask you to disclose personal information via email. For this reason, various banks regularly point to the problem of fake emails or the so-called phishing mails. One bank states for example: “Volksbank Raiffeisenbank or BVR will never ask bank customers for personal information such as PIN or account number via email. Neither will we insert a link to online banking in emails or ask bank customers to make test or remittance transfers. These practices are always indicators of attempted fraud.” (Source: Volksbank Raiffeisenbank) Therefore, you can delete such an email immediately. This is ultimately the simplest way to counter a phishing attack.

www.hornetsecurity.com » “For your safety” – Beware of fake ING-DiBa emails