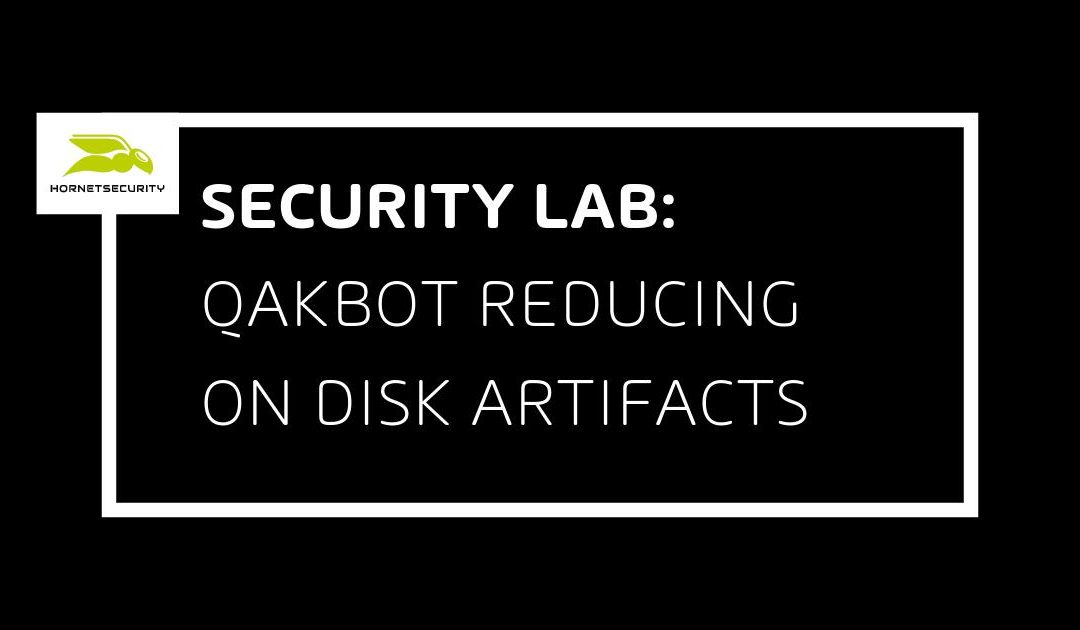 Other changes include dynamic just-in-time decoding and destruction of strings at runtime. So any string used in the malware is only decoded at runtime into memory only and destroyed right afterwards.

The delivery method for the observed QakBot campaigns identified via the regular expression pattern of abc[0-9]+ is still XLM macro documents as reported previously.

QakBot (also known as QBot, QuakBot, Pinkslipbot) has been around since 2008. It is distributed via Emotet, i.e., Emotet will download QakBot onto victims that are already infected with Emotet but it is also distributed directly via email. To this end, it uses email conversation thread hijacking in its campaigns1, i.e., it will reply to emails that it finds in its victim’s mailboxes. QakBot is known to escalate intrusions by downloading the ProLock ransomware2 or lately the Egregor ransomware.

The observed QakBot campaigns identified by campaign ID abc use XLM macro documents for infection. We previously reported on their low detection.3

An overview of the current chain of infection used by the QakBot campaign with identifiers following the regular expression pattern of abc[0-9]+ can be seen in the following flow graph. 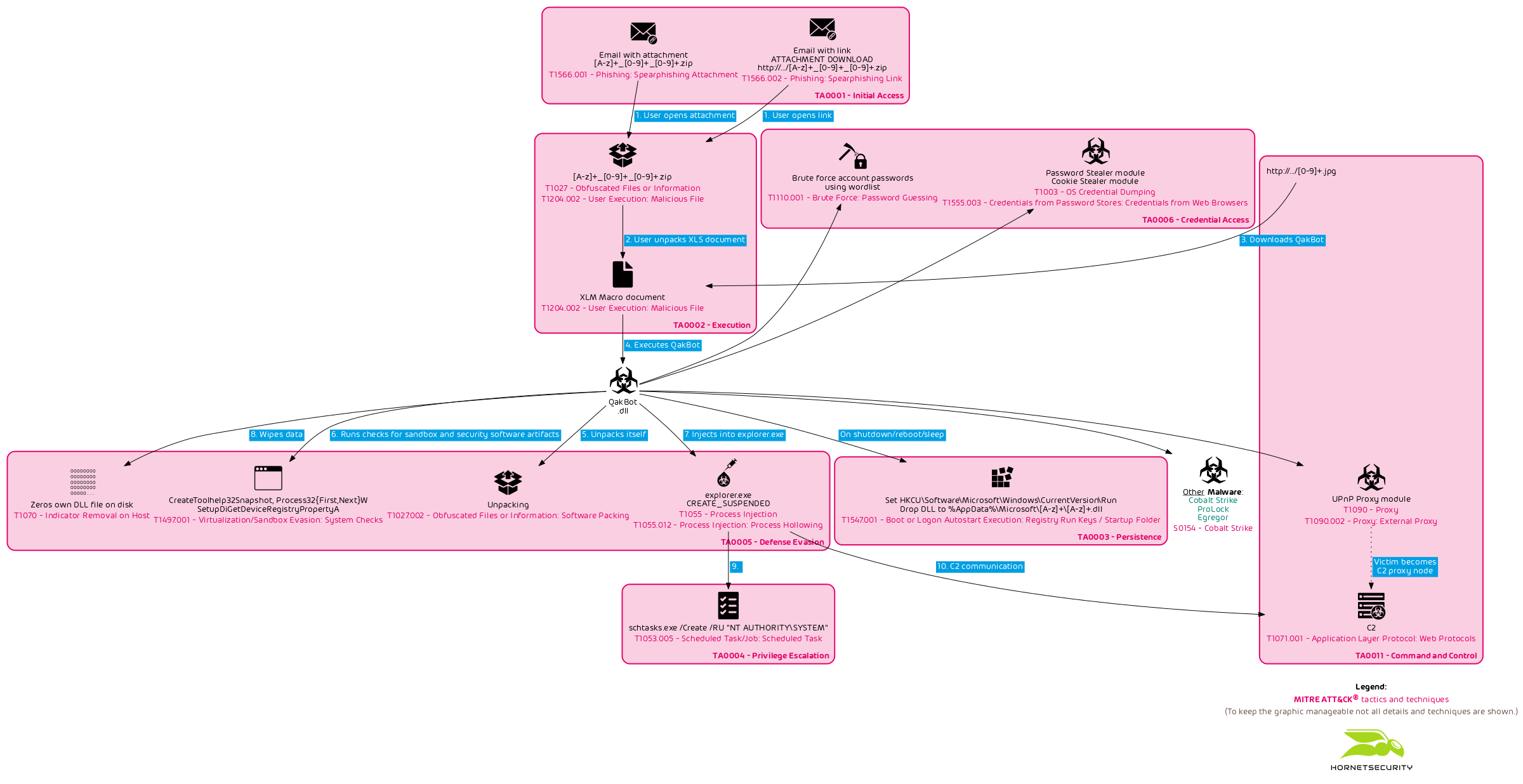 In the following analysis we briefly analyze the infection chain of QakBot after being downloaded and launched by the malicious Excel document. 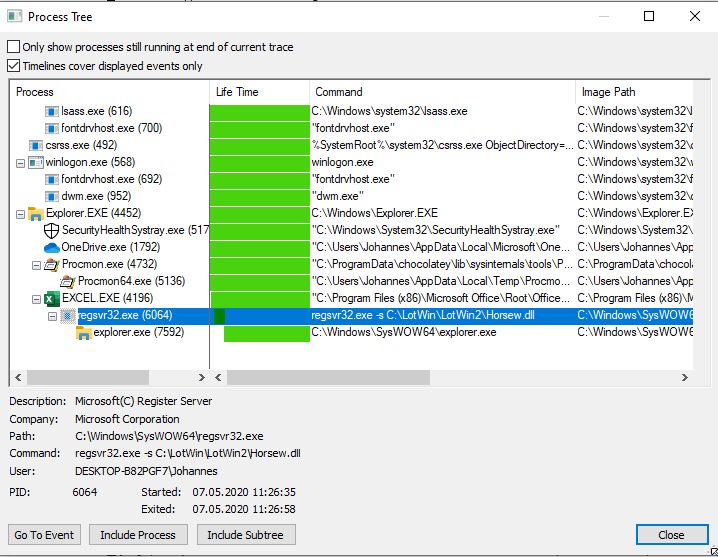 We observed some QakBot DLLs with a manipulated PE header. The message text This program cannot be run in DOS mode. has been altered.

This seems like an attempt to circumvent some static detection rules matching for this message in the legacy MS-DOS stub of PE binaries.

First, the initial downloaded and executed DLL is signed with a (at the time the analyzed sample was distributed) valid code signing certificate.

The signing CA is Sectigo and the organization is given as Aqua Direct s.r.o., which is an existing company.

Strings only decoded at runtime

QakBot will decode its strings only at runtime into memory. After usage the decoded strings are removed from memory again.

QakBot uses CreateToolhelp32Snapshot and Process32{First,Next}W to enumerate the running processes.

It checks for the following processes:

QakBot will set specific bits in a bit mask for each running process it finds. Depending on the resulting bit mask the further infection path is altered, e.g., if avp.exe has been encountered. QakBot will later inject its code into mobsync.exe instead of explorer.exe. Because the searched process names are related to security solutions, we believe that this way QakBot tailors its execution path to evade detection by specific vendors.

Then in another loop, again using CreateToolhelp32Snapshot and Process32{First,Next}W, it checks for:

If it detects any of those processes the execution flow will run into a loop continuously calling WaitForSingleObject(handle, 0x1fa) on a handle previously generated via CreateEvent(NULL, FALSE, FALSE, ...), i.e., it runs in an infinite loop.

If it detects any of those device drivers the execution flow will run into the same infinite loop continuously calling WaitForSingleObject(handle, 0x1fa) on a handle previously generated via CreateEvent(NULL, FALSE, FALSE, ...), as previously mentioned. 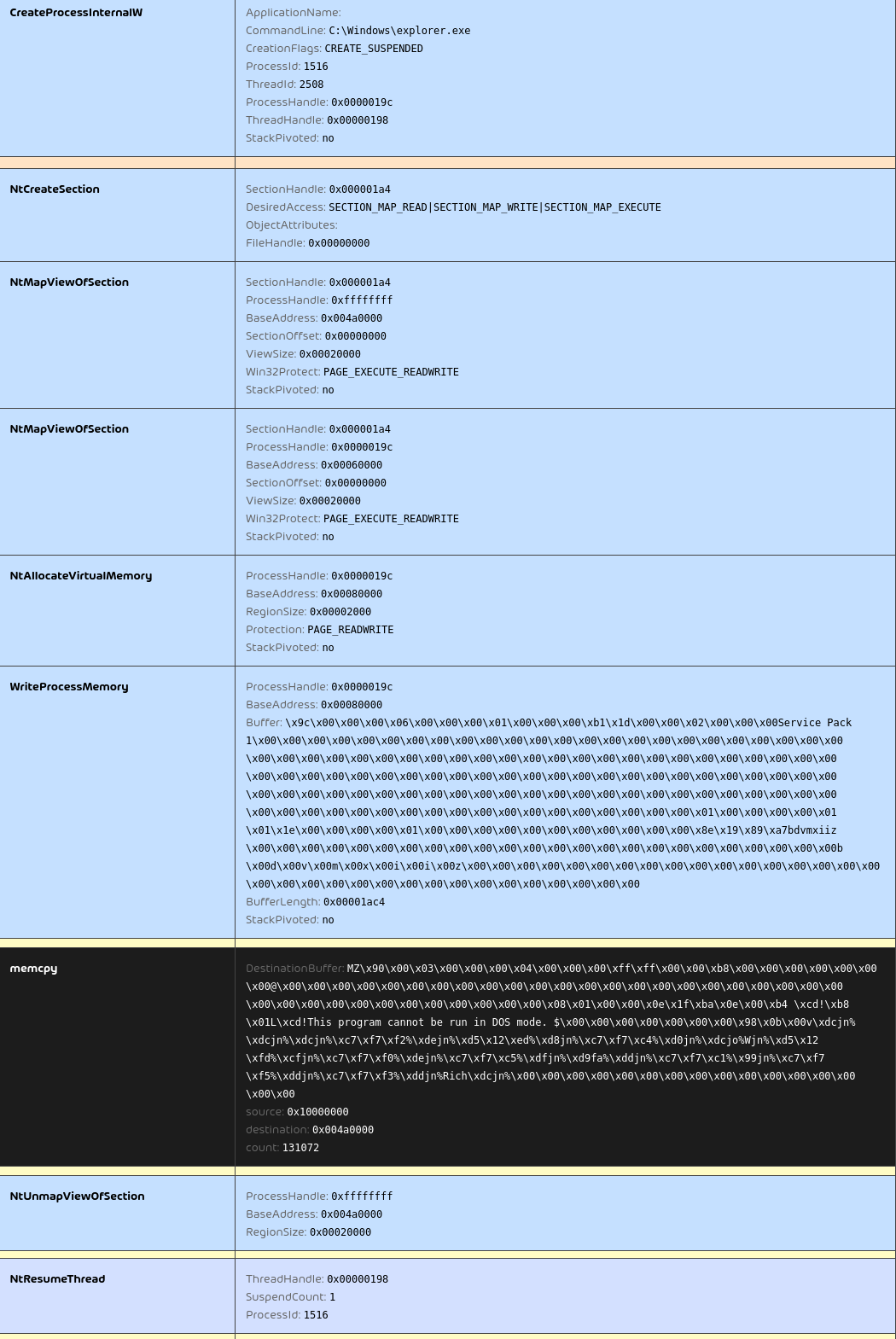 The injected DLL can be extracted via PE-sieve5 or other tools for simplyfied further analysis. 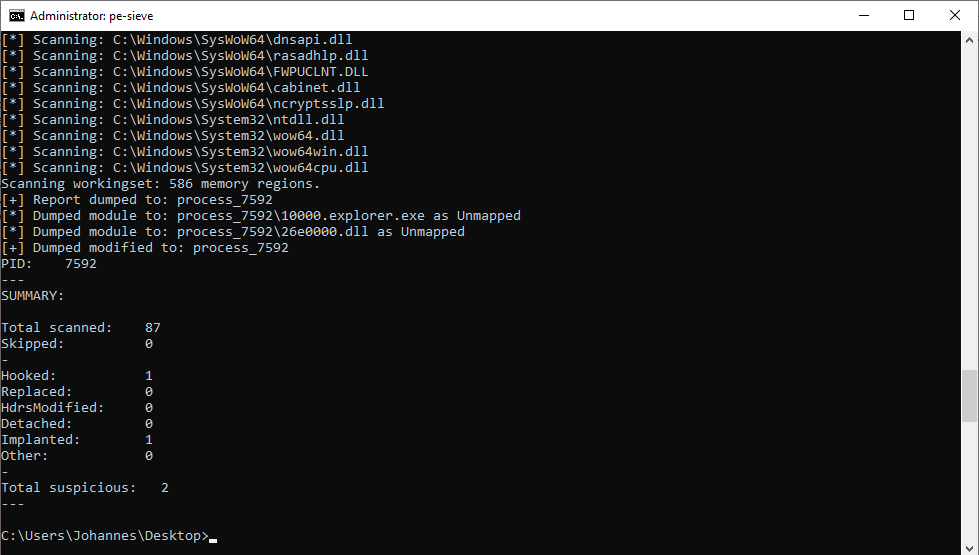 Depending on whether the previous process enumeration yielded results on the list, QakBot will inject into mobsync.exe (e.g., in case a avp.exe process is found running) instead of explorer.exe. But for simplicity we will only follow the explorer.exe process injection path we observed in our analysis environment.

After avoiding detection, the injected QakBot code within explorer.exe will start communicating with the C2 servers.

Like in previous versions of QakBot the C2 IP list is stored RC4 encrypted in resource section 311. The first 20 bytes of the section contains the RC4 key with which the rest of the section is decrypted. The first 20 bytes of the decrypted data will contain the SHA1 sum calculated over the rest of the decrypted data. It is used as a verification for correct decryption. Unlike in previous version, the C2 list is now stored in binary form and not as ASCII text anymore.

For details on how to extract the C2 list and QakBot’s configuration see the Python3 script in the appendix. The input to the script is the path to the DLL that QakBot injected into explorer.exe, which we previously extracted via PE-sieve5. 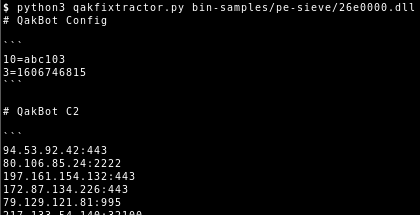 The configuration is stored using the same RC4 encryption scheme in resource section 308. In it we can see the bot and/or campaign ID abc103 that is associated with the analyzed sample. It is still stored in plain ACSII text. For each campaign the number is increased by one. This allows the operators behind QakBot to keep track to which campaign each victim connecting to their C2 server belongs to. Another currently observed identifier is tr02. This identifier, however, stayed the same over multiple malspam campaigns.

Via the C2 connection the operators behind QakBot can remote control the malware and deploy additional malicious modules.

QakBot will not store its configuration and C2 list on disk anymore. It will use the registry for storage.

The previous QakBot version used to overwrite its initial executable with a copy of cmd.exe. This version will overwrite the portion of the initially downloaded DLL after the PE header with zeros.

Here is the entropy of the QakBot DLL as downloaded.

The zeroing of data after the header can be clearly seen when comparing the previous plot against a plot of the DLL file after wiping.

After the system boots up again, QakBot is started via the run key. The execution tree also starts via regsvr32.exe -s ... like the initial execution from Excel. QakBot follows the same steps as previously outlined resulting in process injection into explorer.exe.

QakBot will then delete the run key registry entry and delete the DLL it dropped to disk prior to the reboot.

This way QakBot’s persistence can not be detected at runtime.

From our analysis we can conclude that QakBot is trying to avoid persistent file artifacts. In previous version the configuration and QakBot executable were permanently stored on disk. This made it easy for security tools to detect them. The new version tries to avoid permanently leaving its artifacts on disk. While QakBot is not going fully fileless, it new tactics will sure lower its detection.

But even though QakBot has changed, the delivery mechanism behind the QakBot “abc[A-Z]+” campaign did not. Hence, an infection by this threat actor can be successfully prevented by blocking the initial emails.

The hashes of the analyzed QakBot samples are:

The tactics and techniques used by QakBot as defined by the MITRE ATT&CK framework are as follows: