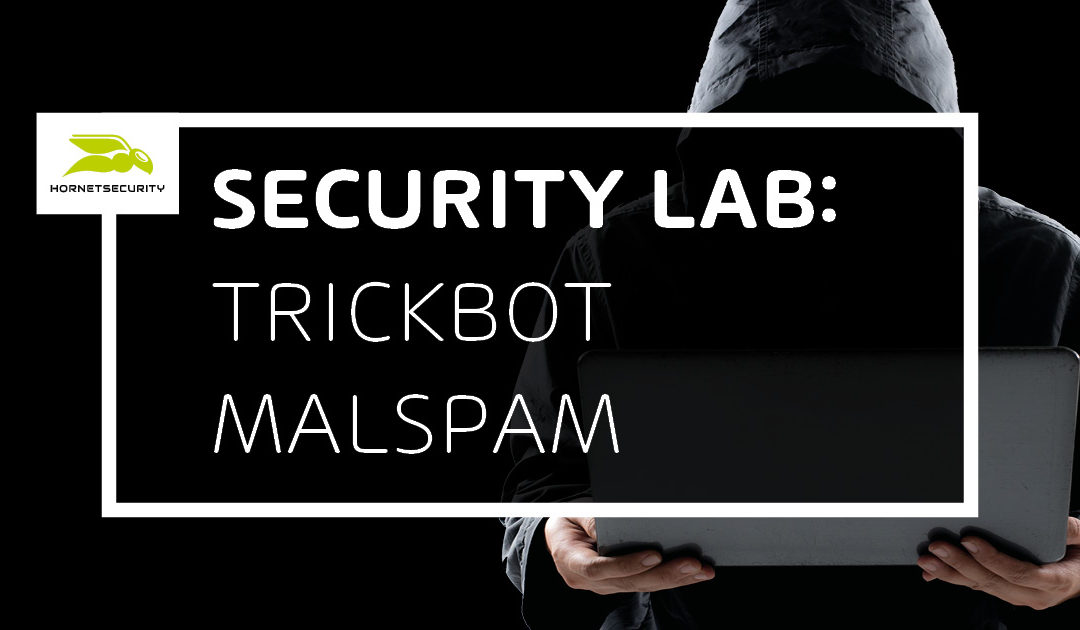 The Hornetsecurity Security Lab has observed a Malspam campaign distribution Trickbot [1] that uses the Black Lives Matter movement as a lure to entice victims to open a malicious attachment. The Trickbot downloader document first injects shellcode into the WINWORD.EXE process. Then from that shellcode spawns a cmd.exe process into which it again injects more of the same shellcode. This cmd.exe process then downloads the Trickbot DLL and executes it via rundll32.exe.

The initial emails claim to be from the State office, Country authority, or Country administration:

Attached is a file named e-vote_form_0000.doc, further suggesting the email to be some sort of official vote. 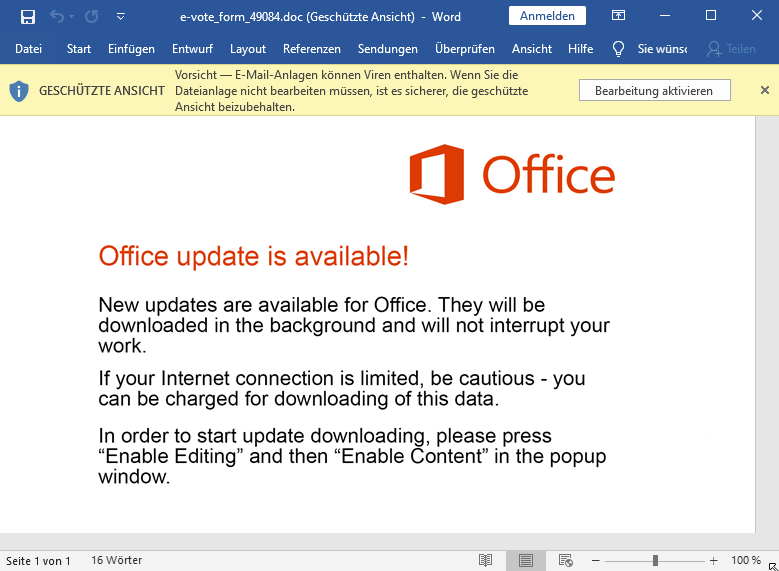 If the instructions are followed the malicious VBA macro in the document is executed and downloads the Trickbot malware.

The initial portion of the infection chain until the Trickbot malware is deployed is depicted in this flow chart: 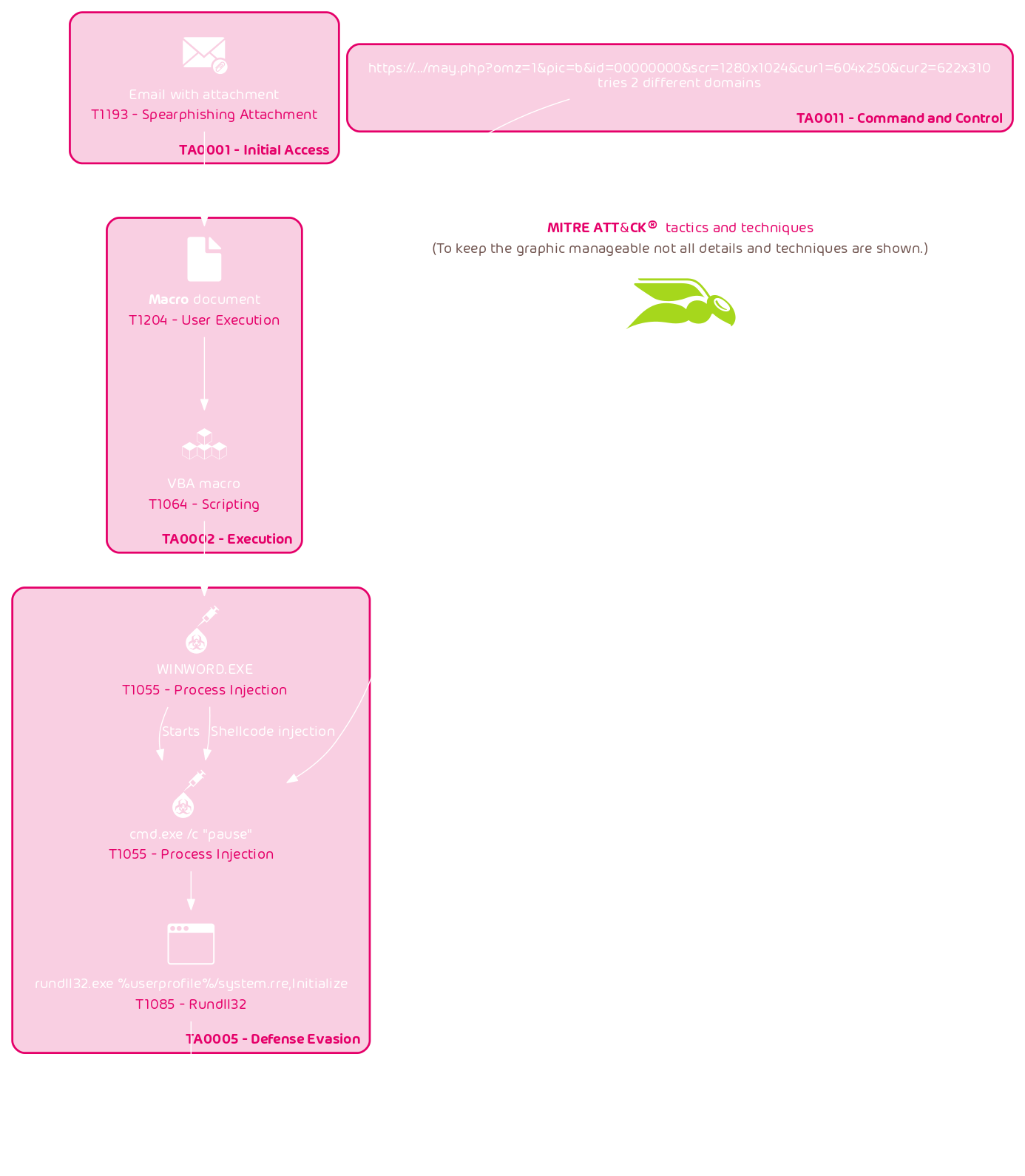 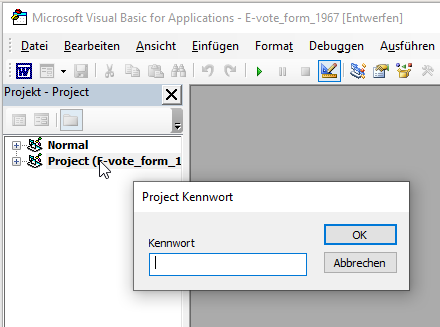 The first thing the VBA macro does is display a fake error message:

This results in the following pop up: 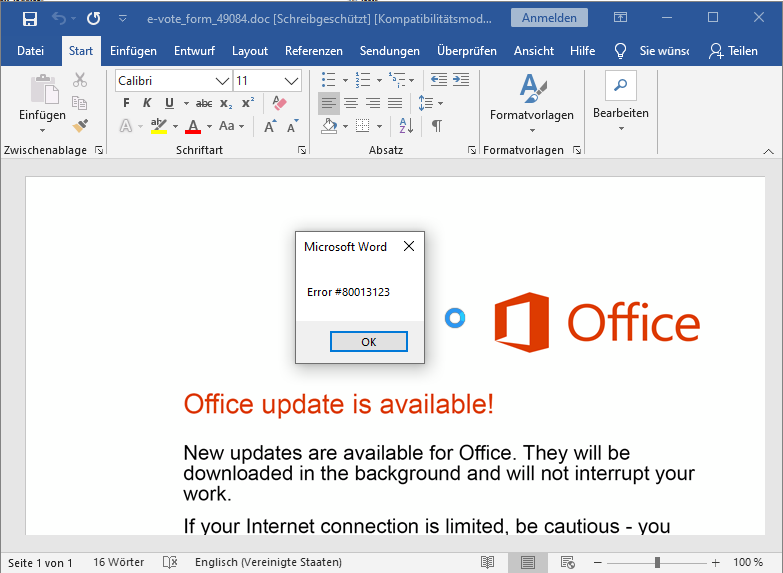 This is likely an attempt to probe for user interaction to bypass sandbox detections. It could also be an attempt to cover up that there is no document. A victim may be satisfied by receiving this error and assuming the document is broken.

The macro will use VirtualProtectEx and CreateThread to inject shellcode into the WINWORD.EXE process. To this end, the code assembles one large string:

Last but not least, the decoded shellcode is set to PAGE_EXECUTE_READWRITE using VirtualProtectEx which was previously aliased to extensionsComment and then a thread is started using the address of the shellcode as the thread’s start address using CreateThread which has been alias to sMail: 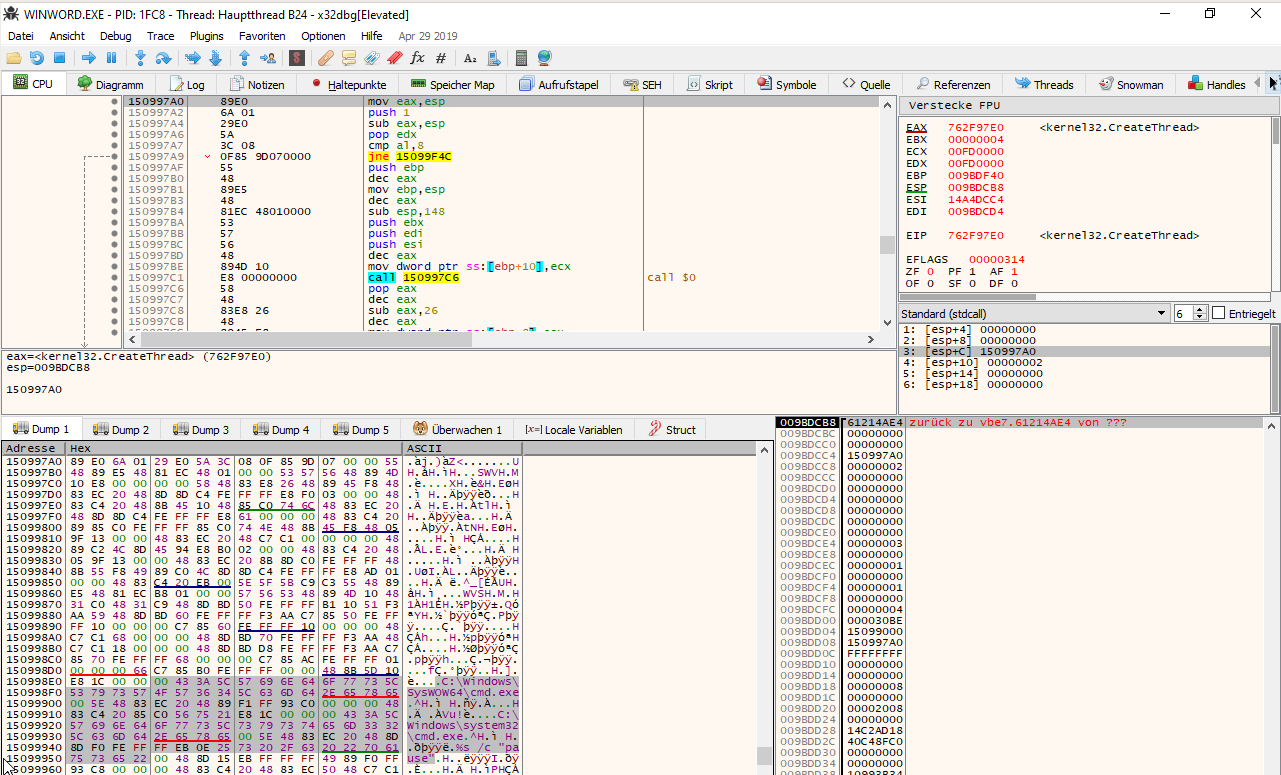 The cmd.exe /c pause process is likely used to evade detections of creating a processes with the CREATE_SUSPENDED flag. A technique that is usually used to start a processes in the suspended, i.e., paused, state, to then inject code into it, and then resume it.

The injected shellcode is the same shellcode that was injected into the WINWORD.EXE process, however, the entry point passed to CreateRemoteThread is different resulting into a different execution flow for the shellcode execution within the cmd.exe process.

The shellcode in the cmd.exe process will also resolve several library functions. Additionally, it will decode the Trickbot download URLs.

This is likely done to verify mouse movement and avoid sandboxes.

In case the download is successful the downloaded file is written to C:\\Users\\<username>\\AppData\\Local\\system.rre and executed via rundll32.exe %userprofile%/system.rre,Initialize using ShellExecuteA. The system.rre file is the Trickbot DLL.

The double shellcode injection is likely used to evade behavioral detection as WINWORD.EXE usually does not download files from the Internet nor execute rundll32.exe. Hence, such anomalous behavior is more likely detected than cmd.exe spawning the rundll32.exe process. The query for the systems display resolution as well as double query of the cursor position is also likely done to avoid delivering the Trickbot DLL to sandbox systems.

Hornetsecurity’s Spam and Malware Protection with the highest detection rates on the market already detected and blocked the malicious Trickbot document based on a detection signature.

In case the basic detection signatures would have not blocked the emails Hornetsecurity’s Advanced Threat Protection (ATP) would not have been impacted by the various anti-sandbox mechanisms either. The human interaction simulation of the ATP sandbox successfully clicks the fake error message away for a complete execution of the malicious document: 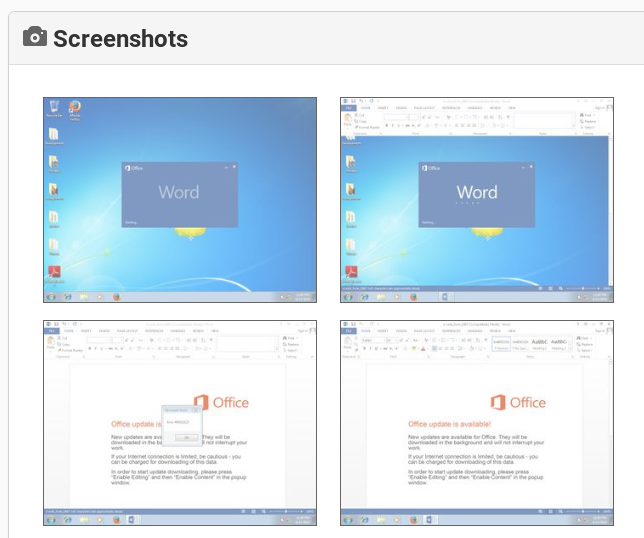 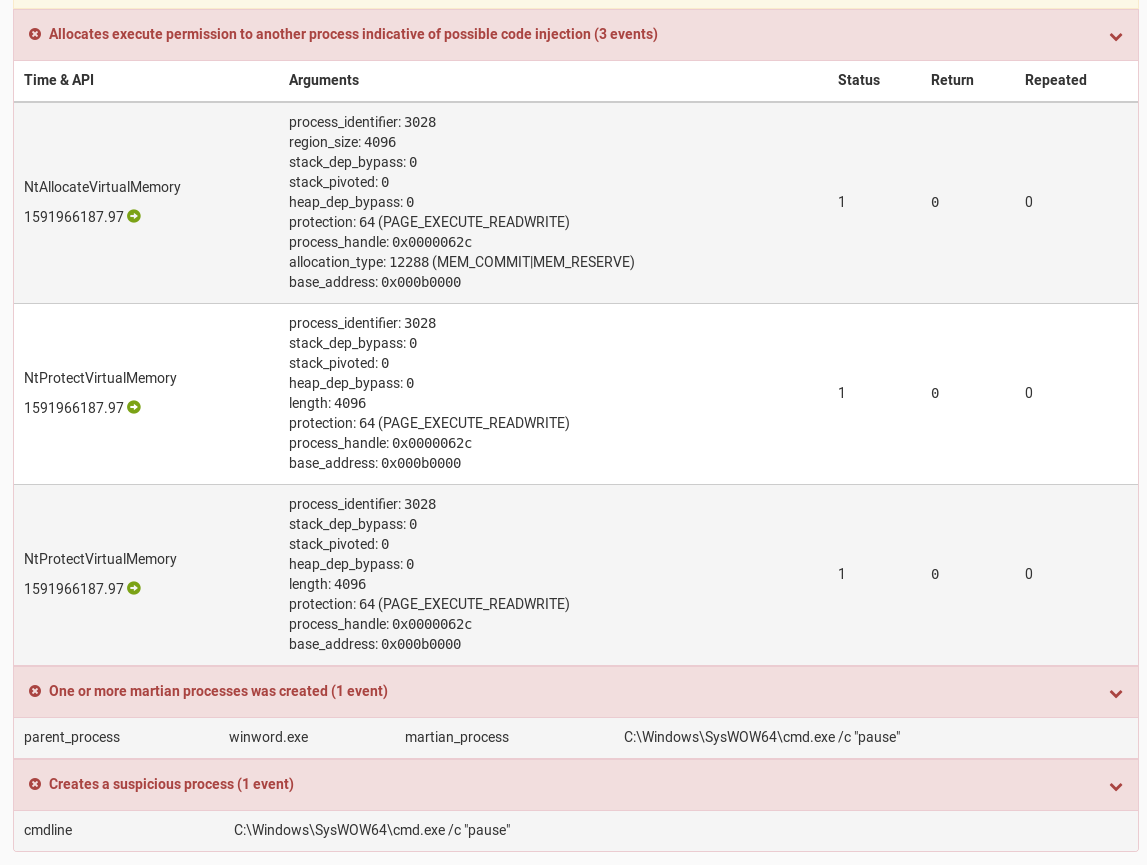 The human interaction simulation also results in the two queried cursor positions, send as cur1 and cur2 to the Trickbot download server, to differ:

This way Hornetsecurity’s ATP sandbox is not fooled by the various anti-sandbox techniques.