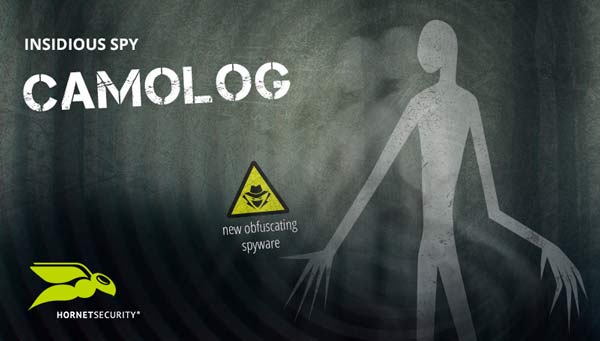 When it comes to new types of malware, there is always the question of what their objectives are. At the moment we are monitoring a new .NET spyware that has not yet been reported. It distinguishes itself by using persistent anti-analysis techniques implemented by utilizing the Confuser packer. Apart from that, the spyware does not put a lot of effort into disguising itself during runtime, thus revealing its intentions. This malware collects login details from many different programs and uses a keylogger to gather information.

This .NET spyware that we named Camolog is spreading due to an ongoing phishing campaign and it uses a keylogger to collect login details from mail clients, browsers, FTP and instant messenger clients. After these campaigns collect information, the access data gathered is usually sold by cybercriminals or used for later attacks.

In the individual emails of a large wave of spam emails, the subject headings (see screenshot) and attachments are slightly different. Most of the time, the attachments that deliver the malware are between 400KB and 1.3MB in size. In the following screenshot, you can see one of these phishing e-mails with the contact information crossed out, because in many cases, these are the information stolen from real people. 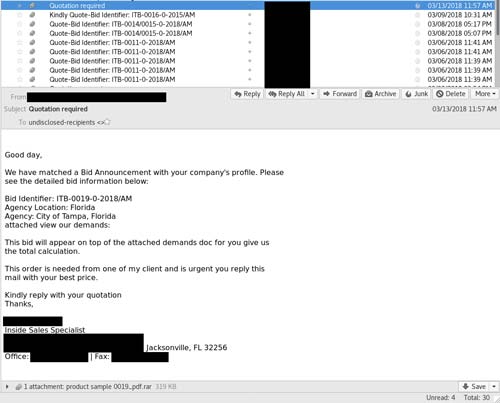 Example of a phishing mail that delivers malware

The phishing email fools the recipients into believing that they are going to receive a price quote or an offer of some kind and this motivates them to open the attachment. However, it contains a RAR archive named “Sample Product 9076_pdf.rar”. The archive hides the executable .NET file “SampleProduct9076_pdf.exe” which serves as a dropper for the spyware and is secured by a version of the publicly available cover-up tool Confuser.

When opening the malware in the .NET decompiler dotPeek, the usage of Confuser becomes apparent. The project name “dimineata” is noticeable and can be used to identify the malware and is displayed in the screenshot below. 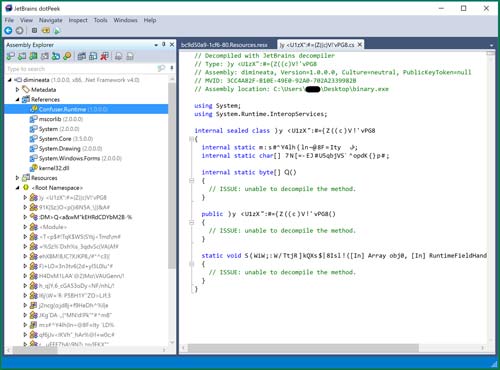 The .NET Decompiler dotPeek lets you analyze the Confuser.

On the other hand, the application of both anti-decompiler and anti-debugger techniques makes it harder to analyze the malware. The analysis tool IDA Pro will crash when loading the binary file, specific .NET decompilers do not function properly and debuggers used in dynamic analyses fail, which means that manual analyses will rarely provide information. It’s likely that this is also one of the reasons why there is an absence of this spyware being publicly reported so far.

The only way to obtain an overview of this malware’s behavior is to run it in a safe and controlled environment. In doing so, you can observe that the malware runs as a process named “chrome.exe” with the description “Accu-Chek 360˚ diabetes management software”. This process starts another sub-process with the same name. After a few moments, the original binary file generates a copy of itself as AppDataLocalTempiaqiaq.exe, starts its sub-process and subsequently deletes itself.

At the time the sub-process is loaded, its binary data must be fully extracted and decrypted in the memory. The transfer takes place in the form of a byte array to the AppDomain.Load() function. This function is not affected by the anti-analysis methods of the cover-up tool because it belongs to the .NET framework. Unlike the malware functions, it can be easily analyzed. Thus, with a debugger such as dnSpy it is possible to set a breakpoint on this function and dump the binary file of the malware that is loaded by the dropper. But, let’s have a closer look into the malware itself.

The binary file of the dropped spyware is only masked by randomly renaming the functions and variables, not by additional anti-analysis methods. Therefore, it is possible to generate readable source code with a .NET decompiler again and thus reveal the behavior of the malware.

What information is collected?

The spyware collects numerous information: Next to the FTP Client SmartFTP’s connection data, which are saved in the favorites, but also passwords from the client WS_FTP, recently used connections from FileZilla, connections of saved sessions from WinSCP and the connection data from FTPWare.   Additionally, the account data saved in the Instant Messenger Pidgin and the passwords from the video chat tool Paltalk are read out. Camolog also diligently collects account data from the Outlook and Thunderbird mail clients as well as the login details from the YandexBrowser, ChromePlus and Chromium browsers. The spyware can also record all kind of data and password input with a keylogger.   The Spyware nests itself within the system by creating registry keys for Windows Autorun (see list of indicators). The malware is pretty good at identifying itself in the system through these registry keys and the running process “chrome.exe”.

Through the use of our cleverly designed spam filter mechanisms, Hornetsecurity has been detecting the emails of this campaign since they first appeared and we have been filtering them out in the cloud. As a result, there is no way for the spyware to get close to our customers’ business infrastructure.   With Hornetsecurity Advanced Threat Protection, our customers benefit from being protected against any variation of this malware. Through the use of behavioral analysis, the level of protection Hornetsecurity ATP provides exceeds that of a conventional spam filter.   Here is an extract from the ATP behavioral analysis: 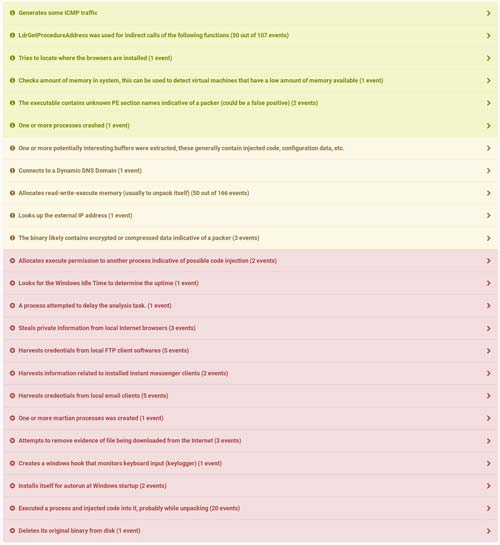 The detailed evaluation of the sandbox analysis.

Subject lines used in the campaign:

Dropper from out of the archive

Registry Keys, of which information have been gathered

Files, of which information have been gathered

Registry Keys, that have been created to generate persistence