DDoSage too high for your own protection measures 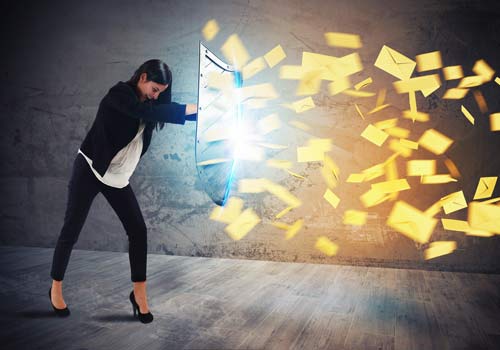 You often read news reports which state that a DDoS attack was responsible for the breakdown of a company’s website. Such an attack uses hijacked systems to intentionally generate a flood of data which paralyzes a company. Amongst others, email servers are frequently subject to DDoS attacks.

These attacks lead to the unavailability of websites and other services for a certain period of time. This outage of service can span from a few minutes to a few hours and even multiple days. Downtime – a nightmare for every organization.

DDoS attacks are not only able to hit the IT-structures of big international firms, which usually have well-engineered security concepts, they can harm smaller companies as well. Public institutions, administrations and authorities are also targets of these attacks. The reasons behind them are manifold: They can be traced back to the pure enjoyment of ‘destruction’, but the intentional harm of competitors or foreign governments can also be motives for these actions. Even hate and vengeance often cannot be ruled out here. For this reason, resorting to a reliable security system is inevitable.

Each second in which, for instance, a mail server or certain kinds of website services are unavailable is expensive for an organization. This is especially true for companies which primarily process their transactions and offer their products and services online. The same goes for business divisions which handle their customer support services using email. The costs, however, do not only derive from the lost revenue during downtime. Having to quickly take measures of defense and potentially needing assistance from external experts can likewise become a cost driver. On top of everything, the impairment of the company’s reputation is another problem.

A company which the customer does not trust will not be able to have a solid long-term business base. For this reason, it is understandable that nearly 50 percent of affected companies keep quiet in the event of a cyber-attack. The fear of having to publicly admitting to a damage of their image is too severe.

This form of damage control might work in cases of simple cyber-crimes. It does not suffice however when it comes to DDoS attacks or forms of attacks that are a lot more complex. That is because these attacks do not only disrupt the activities and processes of the business unit, but often also cut through to the outside. Customers then notice these disruptions since they are directly affected by them as well.

Reliable IT security concepts are the solution

Companies should therefore be ready for DDoS attacks and every other form of cyber-attack. Security solutions such as the Hornetsecurity spam filter service are able to recognize a DDoS attack on a mailing server early enough and to fend them off. In the case of more complex forms of attack, like ransomware or identity theft, it is recommendable to use Advanced Threat Protection. This is a security solution which reliably recognizes and inhibits ransomware, blended and targeted attacks as well as digital espionage. Advanced Threat Protection’s (ATP) special analysis engines ensure this process. You can learn more about this here.

How can companies protect themselves from a DDoS attack?

But back to DDoS attacks. To prevent these, companies and authorities should take certain security precautions. What to do to effectively protect oneself from a DDoS attack.

1. The explosiveness of a DDoS attack

In principle, every organization can become the target of such an attack. Ultimately every firm and every administration must ask itself: “What would be the consequences of an outage of the mail server for me?” This question is important as the force of a DDoS attack can take shape in different strengths in the business environment. Downtime will be severely worse for a retailer who manages his shop online, compared to a local craftsman’s establishment. The result however is not much different for either of them. In the end, both want to maintain communication with their customers via email. For this reason a security concept is absolutely essential.

It is also important that the company takes precautions and implements specific courses of action in case of a DDoS attack. Should it come to a cyber-attack, a contact person should be immediately available. This could be an IT security officer in the company itself or an external employee of an IT service company, which offers appropriate security services and looks after IT security management.

Similar to ransomware, a successful DDoS attack, as a popular method, can be attached to a claim for money. This is a profitable business model for cyber criminals. This is especially true because the affected companies often agree to the offenders’ claims to avoid allegedly severe consequences. The BSI advises not to be susceptible to blackmail and to refuse to pay these respective sums of money. Instead, those affected should get the police involved and get support from professional IT security experts.

The most important measure to avoid a DDoS attack is to not let it occur in the first place. For this purpose a competent IT security solution is vital – ideally, one that is cloud-based. The reason for this is that these providers have a much more powerful infrastructure and are able to parry even severe attacks without problem. In addition to that, customers do not have to worry about the installation and maintenance of the hard and software.